Île-de-France Mobilités has rounded off its cycling policy in the Île-de-France region with the launch of a new, long-term rental service, with 10,000 electric bikes for €40 a month for all residents in the region, as well as a grant for purchasers of new electric bikes. Marion Chollet and Cyril Aillaud take up the story

The Île-de-France Regional Bike Master Plan aims at tripling the bike modal shift while encouraging daily travelling by bike. For several years, Île-de-France Mobilités has been rolling out specific parking spaces for bikes within stations of the regional public transport network. In order to complete services offered by Île-de-France Mobilités, the Véligo Location scheme – a long-term electric bike rental service – was launched in September 2019. With the first 10,000 bikes made available, that new service is now the most important in the world.

Context and origins of the service

Île-de-France Mobilités, the organising authority for public transport in Île-de-France, is committed to taking up the challenge of organising mixed-modal transport by developing new forms of mobility, including car-pooling, car-sharing, cycling, transport on demand and autonomous vehicles, as a complement to existing public transport, and helping to make getting around the Paris area easier on a daily basis. The aim is to encourage the region’s residents to leave their cars in the garage whenever possible. 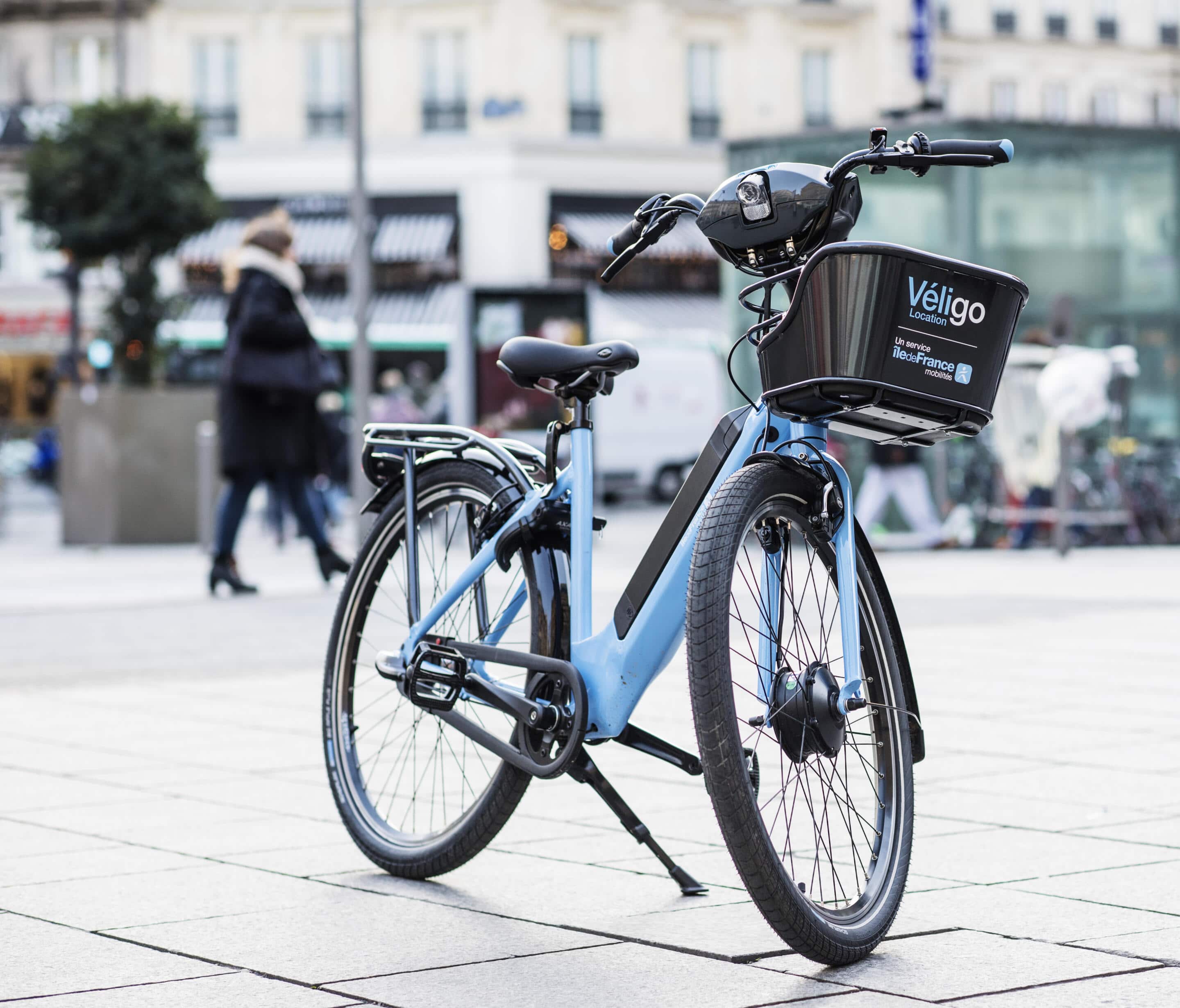 Even though cycling only accounts for a small percentage of trips in Île-de-France (around 2 percent), bike-riding has a real potential for progress for short or medium-length trips. In the Île-de-France region in recent years, cycling has mainly developed in the capital.

Until now, Île-de-France Mobilités’ cycling policy was based on deploying open and locked bike stations, providing mixed-mode solutions alongside the public transport network. Almost 7.000 places have been created throughout the region, and deployment continues.

Electric bikes provide real added value in cycling, a form of transport that is already widely recognised as ecological, economical and good for health. The average distances travelled by cyclists are much longer, rising from 2.5km with a regular bike to 9km with an electric bike. Bearing in mind that the average commute in the Île-de-France region is 10.3 km, using an electric bike is possible not only for the first or last mile of daily trips to the train station, but also for the entire commute without effort, irrespective of the cyclist’s physical condition and the layout of the terrain. Electric bikes are now an efficient and credible form of transport to replace cars and will bring about an increase in bike-riding in the region, and especially in the suburbs or the rural outskirts.

Electric bikes are now an efficient and credible form of transport to replace cars and will bring about an increase in bike-riding in the region, and especially in the suburbs or the rural outskirts

On the basis of these developments and the stakes involved, Île-de-France Mobilités has decided to launch a long-duration electric bike rental service: Véligo Location. To roll out Véligo Location, Île-de-France Mobilités has drawn up a public service delegation contract for a duration of six years. A contractual agreement has been signed with the Fluow consortium, made of La Poste, Transdev, Vélogik and Cyclez, for a total budget of between €62m and €111m, depending on the number of bikes made available.

Description of the service

Since 11 September 2019, 10,000 electric bikes have been progressively made available for rent to all the region’s residents. Depending on the success of the scheme, the number of rental bikes could rise to 20,000, which would make this the biggest long-duration electric bike rental service in the world. A range of cargo bikes (bikes with two or three wheels) could round off the offer by the end of 2020.

The region's residents can register on the Véligo Location website

To sign up, the region’s residents can register on the Véligo Location website (https://www.veligo-location.fr/) to rent a bike for six months (renewable once for three extra months). The goal for Île-de-France Mobilités is to give the region’s inhabitants a chance to try out an electric bike, to convince them of the value of this form of transport for their daily trips and to boost changes to modes of transport. At the end of the contractual period, the aim is to reach almost 200,000 people in the region.

The price for the service is €40 a month (€1.30 a day). This price includes repairs and maintenance for the bike, with 50 percent of the monthly subscription payable by employers, alone or in addition to the Navigo public transport subscription for customers with mixed-mode commutes.

To guarantee a high level of service, additional features, including accessory rentals or insurance (theft and damage), are available to customers. Discount rates are also possible. 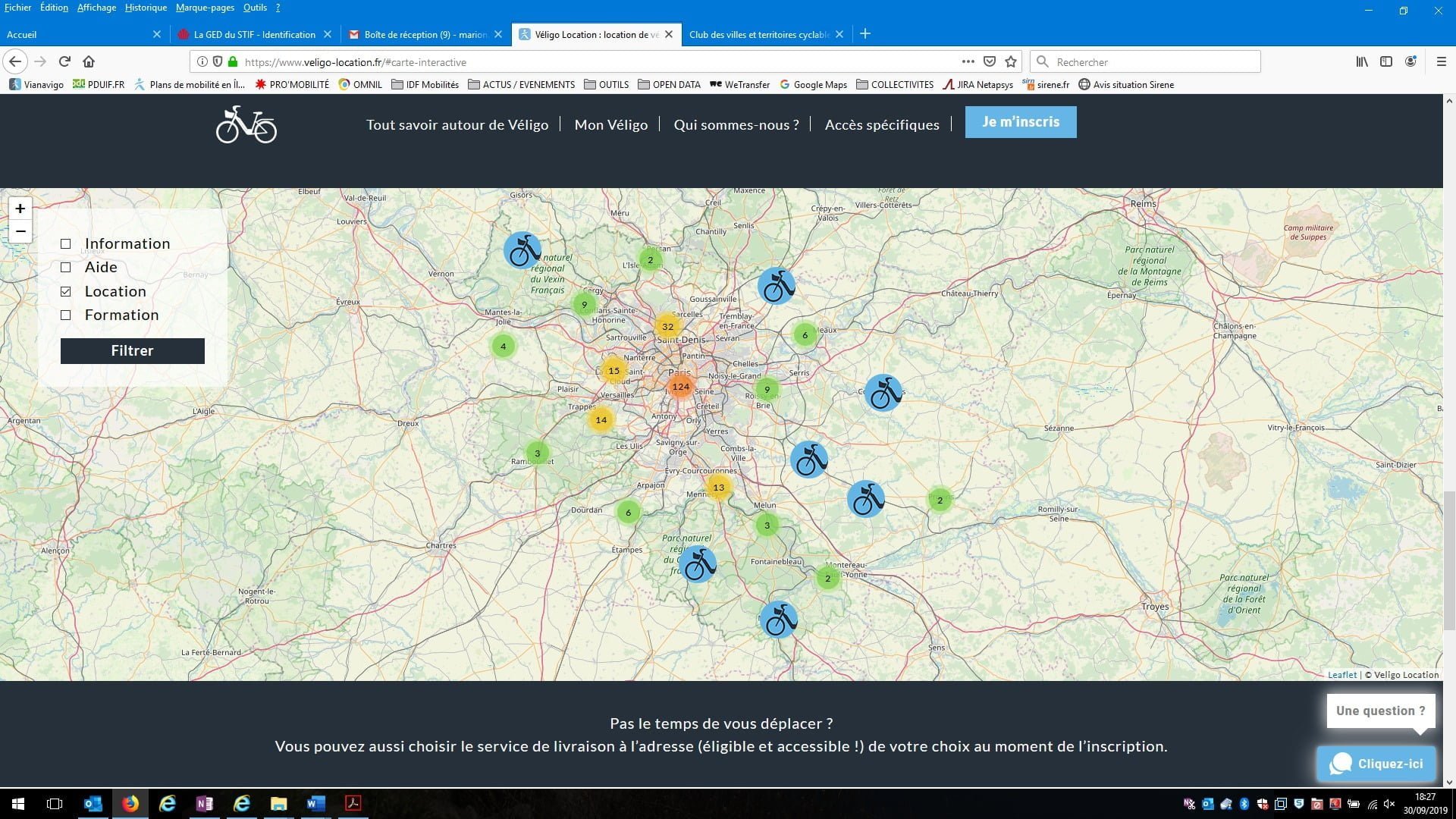 The Véligo Location scheme is available everywhere in Île-de-France. To pick up a bike, customers can choose between going to one of the 250 rental points or to have a bike delivered directly to the location of their choice, such as their home or workplace. There is a wide range of rental points: post offices and mail distribution centres in La Poste group, Urbis Park car parks, shops, independent bike stores or the premises of several associations.

The bike has been designed and assembled in France. Special attention has been paid to the design, including a basket to protect riders’ belongings, a luggage rack where a child seat or saddle bags can be fitted, and a protected phone holder where riders can recharge their smartphones. The bike is robust and comfortable: the puncture-proof tyres are wide, and the technology with a torque sensor providing progressive assistance is innovative and makes for a pleasant riding experience. The battery has a travel range of 75km and is at frame level having been specifically designed for the Véligo Location bike, helping to limit theft.

Since the service will be rolled out in an area of 12,000 km2, a big marketing plan has been developed to promote the service and make it more widely known. Media campaigns in the public transport networks and along road networks have been set up.

Extensive press coverage has helped promote the service, too. Social networks are also powerful communication and information channels for the roll-out of the scheme. Twitter, Facebook, Instagram and LinkedIn accounts have been set up. The Véligo Location teams have visited each department in the Île-de-France region with an information kiosk containing up to seven bikes to publicise the service.

Local authorities, including municipalities, also have a big role to play in raising awareness about the service. Véligo Location provides them with three ways to take part in the project:

Since companies may want to recommend cycling to their employees, Véligo Location has also developed a series of special events for companies to introduce the service and including training in bike-riding in an urban environment.

A positive, wide-ranging economic impact is expected from this future service. Indeed, 50 direct jobs have been created to help run the service. Eventually, over 500 indirect jobs are expected to be created, providing a real impetus for the cycling economy in the Île-de-France region. These jobs will be created in the sale of electric bikes and accessories, repairs and maintenance for purchased bikes, as well as for deploying high-quality bike-parking services.

To encourage the region’s residents to take up cycling, Île-de-France Mobilités will be rounding off the Véligo Location service with a grant for buyers of new electric bikes and cargo bikes. Customers can buy their own bike with a grant of 50 percent of the retail price with a limit of €500 per bike and per purchaser after the deduction of local subsidies. The scheme will start at the end of the first Véligo Location bike rentals, in late February 2020. 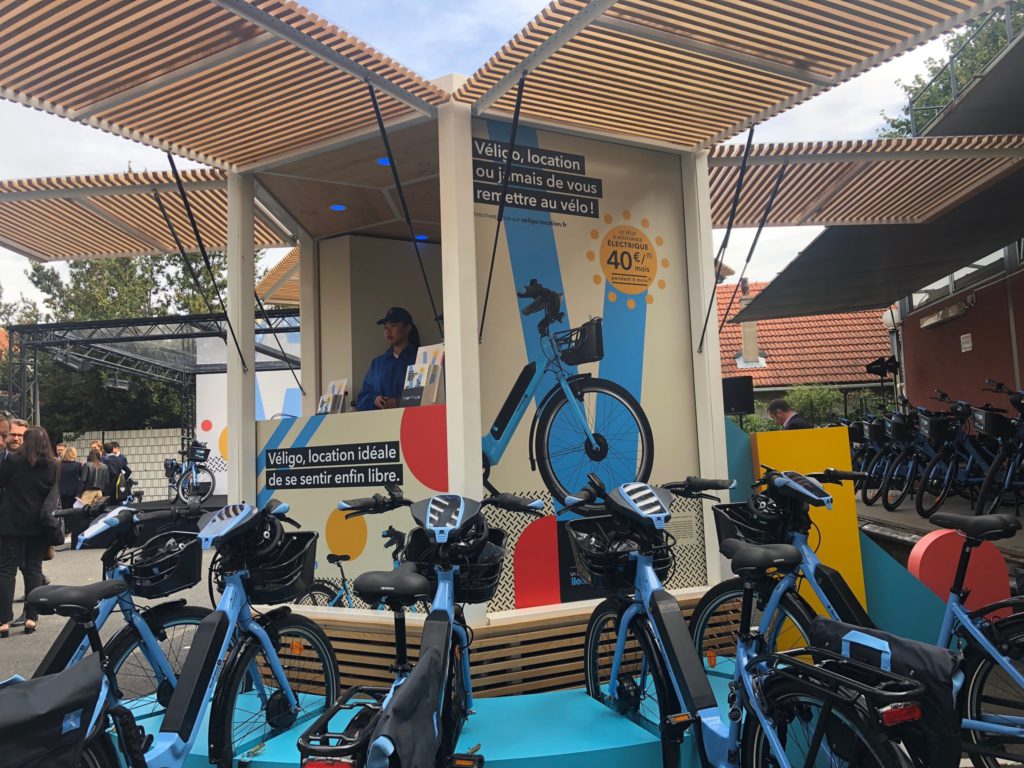