Gerald Brugman and Filiz Çatalgöl on being creative, innovative and inclusive in reducing the footprint of the car in Amsterdam

The Frans Halsbuurt, a 19th century inner-city neighborhood in Amsterdam, is characterized by its narrow streets. Yet, despite the scarce public space, parked cars occupy a great share of the available space. Although this dominance of cars already activated residents to protest for change as early as in the 1970s, the car stayed a dominant player in the streets during the decades that followed. A secondround of civic initiative has taken place and change is now around the corner. With the opening of a new underground parking facility in 2018 on the border of the Frans Halsbuurt, Amsterdam’s city government aimed to cut 273 of the 600 on-street parking spots. Some local residents and business owners asked for higher ambitions, which resulted in three council members to call for a full removal of all 600 on street parking spots (with the exemption of disabled parking, cargo spots, and space for shared car systems). This resolution was adopted, and the city government has taken a great leap forward to realize their ambition of a more traffic-calm Amsterdam’s city centre. In this article we elaborate on the ambition to reduce car traffic, discussing the Agenda Amsterdam Autoluw and the ‘Amsterdam approach’ to realize this ambition.

"In a growing and increasingly popular city like Amsterdam, there is simply not enough space to accommodate bicycles, pedestrians, public transport and cars simultaneously"

Amsterdam is more popular than ever, with a yearly growth of 10,000 residents per year since 2008 and an all-time high number of visitors (from 11 million visitors in 2005 to 18 million visitors in 20161 ). The population is expected to reach 862,987 in 2019. After a brief pause during the financial crisis of 2008, the economy is buzzing and the city is growing rapidly.

This popularity comes with a cost, putting pressure on Amsterdam’s housing market, mobility and public space. Especially in Amsterdam’s historical city center, with its world famous canals, the increase in people and traffic threatens the livability and accessibility of public space.

With the election of a new city government in 2018, the College of Mayor and Alderpersons presented ambitious approaches to protect the city’s quality of life. One of the suggested policy agendas promotes a new vision on mobility, implementing so-called ‘autoluw’ (roughly translated, ‘fewer cars’) measures to safeguard the city’s livability: “It is time for decisions, in which we prioritize pedestrians, cyclists and public transport, and in which Amsterdam reduces car traffic”.2

The city government tries to free up space to play and recreate. This does not imply a ‘carexit’. It is realistically acknowledged that a city cannot function properly without cars. The ambition respects the position of residents and visitors with special needs, elderly, certain entrepreneurs and the role of city logistics. However, the self-evidence of private cars and car traffic is being questioned. In a growing and increasingly popular city like Amsterdam, there is simply not enough space to accommodate bicycles, pedestrians, public transport and cars simultaneously.3

The reduction of cars in the city is not a new phenomenon. Significant steps have been taken since the 1980s. One of the biggest measures was the implementation of parking fees in 1964. In recent decades traffic-calming was realized by creating park & ride hubs on the city outskirts and discouraging go-through traffic in the city center by designing ‘cuts’ in the traffic circulation. More recently, traffic-calming measures are realized by redesigning some high-density mixed shopping and residential streets, in which the car now plays a less dominant role. Currently, a bike street is under construction, forming an inner-city ring road where bikes are the main user and cars are ‘guests’.

The city is continuing this line of pursuit with future measures. The new direction will be captured in the Agenda Amsterdam Autoluw, a long term policy currently designed and expected to be presented to the City Council for approval in the Fall of 2019. The Agenda will consist out of four pillars. The first pillar is aimed at “choosing clean, healthy and shared transport”, with multiplying the growing trend among employers on introducing alternatives modes of transport to their employees. The city aims to increase investments, in sidewalks, ‘bike streets’ and public transport, in both the city and the region.

The second pillar focuses on “creating and utilizing space” for pedestrians, including people with special needs, cyclists, public transport, greenery, and room to play and recreate.

This includes the ambition to eliminate 7000 to 10.000 parking spots. The third pillar acknowledges the conditionality of these measures, aiming for a good fit between proposed measures and specific areas in the city. The fourth and final pillar aims for state-of-the art techniques for effective law enforcements. 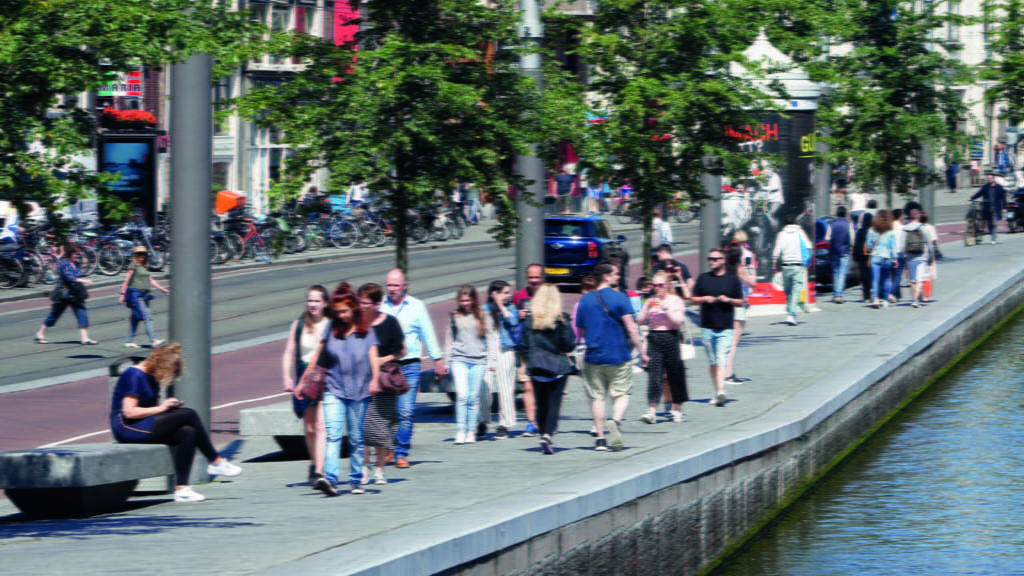 THE (INTER)NATIONAL JOURNEY OF THE AGENDA AMSTERDAM AUTOLUW PROCESS

To design a long-term sustainable policy such as the Agenda Amsterdam Autoluw, Amsterdam aims to include as much expertise as possible, not only from policy experts, but also by including the voice of the public. What characterizes the Amsterdam approach is the reciprocal acquirement of knowledge and creating a dialogue on several levels: both local, national and international as well as online and offline.

Cooperating closely with policymakers in the field of car traffic reduction and inner city livability, the City of Amsterdam has collected experiences and practices from other Dutch cities and abroad. T

o make sure Amsterdam builds on best, and worst, practices from other cities with similar challenges, the director of traffic and public space asked a group of trainees of the City of Amsterdam4 to collect insights from other Dutch and European cities. In visits to Groningen, Utrecht, Den Bosch, Den Haag, Hamburg, Oslo, Copenhagen and Munich, a wide variety of experts and interests groups were interviewed. The most important lessons that emerged from this empirical research will function as inspiration for the Agenda.

Of course, knowledge exchange is never a one-way street. Therefore, the City of Amsterdam organized an international expert meet-up that took place from 13-15 February 2019. Experts from the Netherlands and abroad gathered, together with policy makers of Amsterdam, to share experiences and practices with traffic-calming measures.

A direct outcome of the meetup was the creation of new connections and the formulation of several key lessons on the importance of stakeholder-management, framing, alternatives modes of transport, the application of a holistic approach and behavioral interventions. Sharing experience, knowledge and connections on an international level appeared to be of great value. The positive feedback of the participants showed it was not only valuable for Amsterdam but also for the other cities involved.

Another very important trajectory in the process of designing the Agenda, and with the implementation of measures, is actively involving residents and entrepreneurs. The City of Amsterdam experiments with new approaches towards civic participation. In this case, ‘Amsterdammers’ were informed and asked to share ideas during public meetings. The dialogue is also facilitated online through the establishment of a digital platform where citizens are encouraged to join the conversation on traffic-calming matters and livability.

On a more micro level, involvement of residents and entrepreneurs is currently in progress for the redesign of the previous mentioned Frans Halsbuurt. The starting point in the process was to ask residents, during various meetings and with a door-todoor survey, how they prefer to be involved in the process. Based on that response the actual participation process was designed and outlined. So, a ‘start’ before the actual start.

After that kick-off, policy-makers shared the necessary requirements, followed by sessions, and again a door-to-door survey, for residents to collectively define the design principles they find important. Next follows the co-designing process, with residents and urban designers co-creating the neighborhood’s public space. 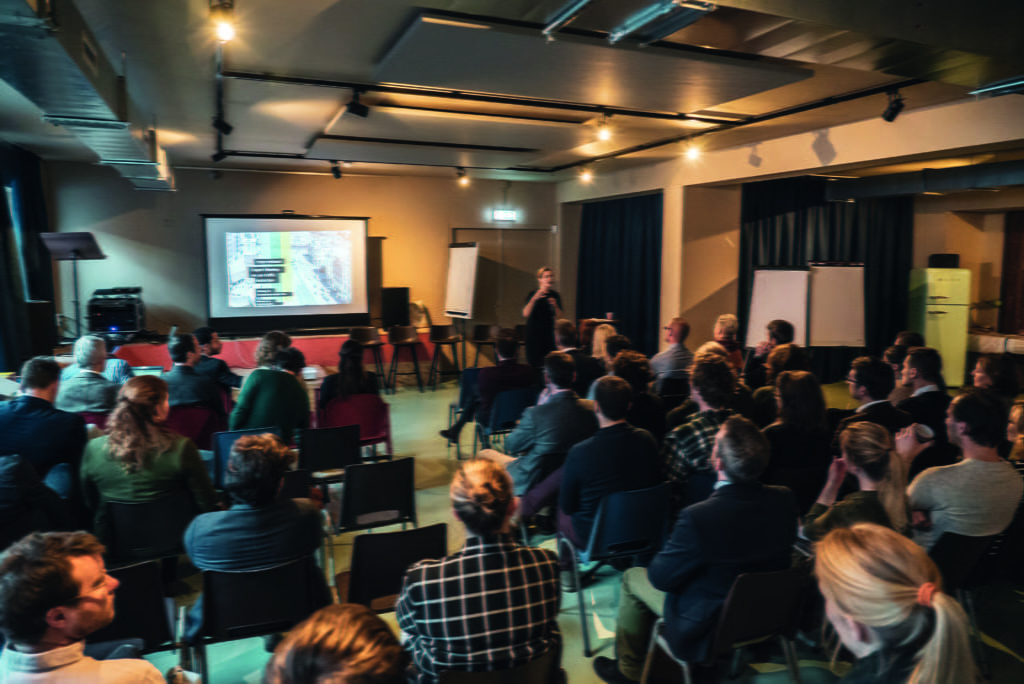 ARE WE THERE YET?

In this article, we have illuminated the Amsterdam approach towards creating a livable city by diminishing the presence of cars and introducing traffic-calming measures. They will be shared during the presentation of the Agenda Amsterdam Autoluw in the Fall of 2019. In the meantime, many measures that serve as input for the Agenda are already implemented. This involves a wide range of measures that can be found on the website of the City of Amsterdam5 . Furthermore, a number of events have taken place to exchange knowledge, inspiration and experiences on a local, national and an international level. The trajectory of involving the people of Amsterdam in the decision-making process is also a significant part of the Amsterdam approach. The city is buzzing with ideas and knowledge that should be maximally utilized when creating policy solutions or interventions.

The City of Amsterdam is in the midst of this journey towards a more livable future. The Frans Halsbuurt is a telling example of this ambition: a traffic-calm area initiated and shaped by Amsterdammers. The road towards a livable and lovely city is paved with many (more) creative, innovative and inclusive solutions aimed at reducing the footprint of the car in Amsterdam. Since, as always, the journey is as spectacular as the final destination.

NOTES
[1] “Amsterdam zou de drukte nu echt te lijf gaan – en, werkt het?” NRC, 20th of January 2018
[2] Coalition agreement “A new Spring and a new Sound”. City of Amsterdam, May 2018.
[3] Website of the City of Amsterdam. 22nd of March 2019.
[4] The traineeship of the City of Amsterdam is a 2-year education and training programme, which incorporates work experience for recently graduated young professionals. During the programme, the trainees carry out both individual as well as group assignments aimed at various current urban issues.
[5] https://www.amsterdam.nl/ en/policy/policy-traffic/ 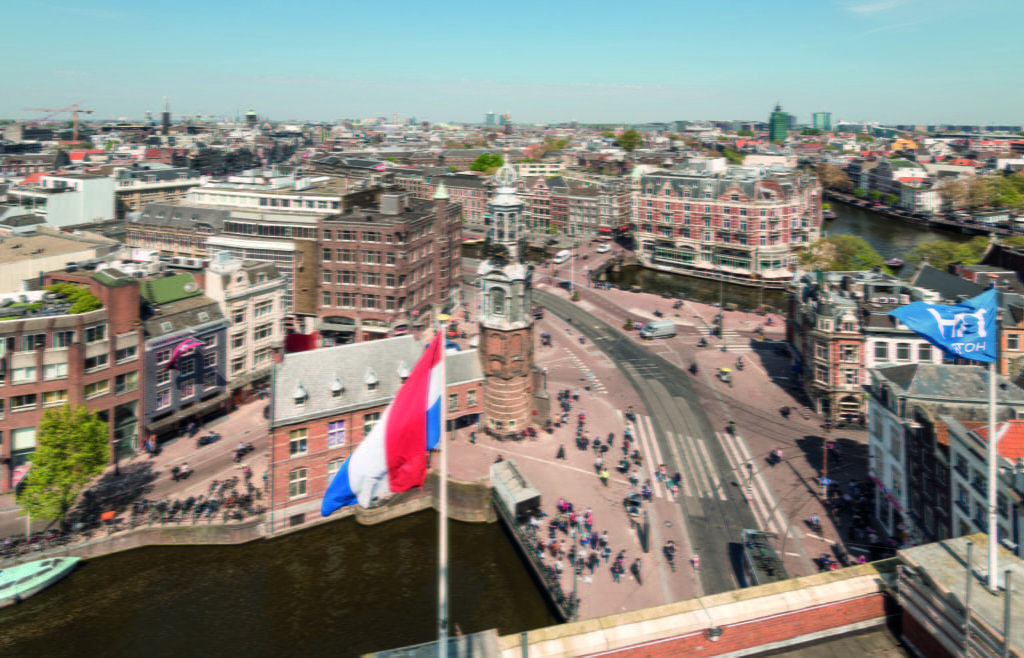 Back to Thinking Cities magazine #12