The project will recommend ITS that meet the needs of Vulnerable Road Users (VRUs).

The VRUITS project helped improve the safety and mobility of VRUs through ITS applications. The project took a VRU-centric approach to come to recommendations for suitable ITS

applications, leading to the full integration of the VRUs in the traffic system.

This proposal aimed to make the SAFECROSS system (Smart Pedestrian Crossing for People with Reduced Mobility), developed by SICE, smarter, by integrating 3G/Wi-Fi mobile communications (802.11p) into the traffic regulator, so that vehicles can be warned 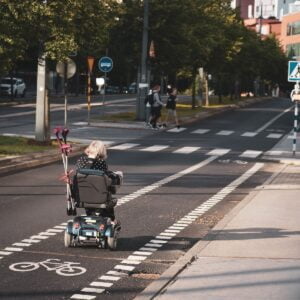 about special situations occurring at the crossing, For example, at the lower crossing and during phase 1, the driver (street A) is allowed to turn right, but there may be pedestrians using the zebra crossing (street B). In this case, thanks to the SAFECROSS system and I2V communications, the vehicle that is about to manoeuvre can be told whether any pedestrians are crossing on street B, where there is no visibility. Alerts of this type can also be considered in a 36-communications environment using mobile phones, by subscribing to a Smart City–type service.

The project was funded by the European Commission's Directorate General for Mobility and Transport through the FP7 Programme. It ran from April 2013 to March 2016.

Workshop on VRU road safety and ITS