POLIS and European Regions Research and Innovation Network (ERRIN) release proposals for concrete amendments to the legislation on TEN-T regulation (No 2021/0420).

The EU’s new approach to Urban Nodes promises to support the development of the TEN-T and the role of cities and regions; however, amendments to the legislation are still advised.

In June 2020 POLIS and ERRIN published an opinion paper – “Strengthening urban nodes and innovation to enhance the capacity, sustainability, and competitiveness of the European transport system” – on the revision of the TEN-T guidelines based on our experiences as regional and local actors with the TEN-T implementation.

The opinion set out key messages for the common provisions on urban nodes, research, and innovation emphasising the importance of urban nodes, the Green Deal, and the EU’s COVID-19 recovery in TEN-T policy.

Following on our opinion paper, and as a response to the spring 2021 consultation on the TEN-T regulation (No 1315/2013), we have now released proposals for concrete amendments to the legislation on the definitions, components and requirements of urban nodes.

Urban nodes and their importance

Transport in urban nodes constitutes a large part of GHG emissions (80%, Eurostat) and as such a renewed TEN-T policy, which affords Urban Nodes the same importance as other priorities in the TEN-T guideline, is crucial to achieve the EU’s climate goals.

The introduction of the concept of Urban Nodes in 2013 was incredibly important in the establishment of more sustainable transport systems. With this revision, there are opportunities to use the capacity of urban nodes further.

The TEN-T regulation has been instrumental in transforming the existing patchwork of EU transport modes into a more integrated network encompassing all Member States, regions, and cities. The current guidelines recognise and formalise the role of urban nodes in these transport networks as important hubs that facilitate the flow of people and goods.

Indeed, this was expressed at the Connecting Europe Days this week on the panel on Urban Nodes, which explored how urban nodes can be better integrated in the wider network of the TEN-T.

"It is more important than ever that European citizens stay connected. Urban nodes make this possible, notably through the TEN-Ts,” Said Jeroen Olthof (Regional minister for Noord-Holland) at Connecting Europe Days, speaking on the panel with representatives from across Europe.

We welcome how the new regulation clearly shifts urban nodes in the centre of the TEN-T. This is a new accent, supporting the EU to reach the ambitions of the Green Deal and to reach climate neutrality by 2050.

However, there are several key revisions which would support cities and regions further.

The most crucial element is the definition of Urban Nodes (in article 3). We would like to bring this in line with the SUMP logic and expand the node’s concept to the Functional Urban Area (FUA).

The concept of an integrated transport system for each urban node, especially journeys from the city centre to the peri-urban areas where many of the daily commutes take place, play a key role in the Urban Area’s planning. Therefore, the scope of an urban node should zoom out on the urban-regional or the FUA as well. Doing so would lead to a better integrated and decarbonised transport system.

According to this new approach, Urban Nodes are required to prepare a SUMP, liaise with the Member State about this and partake in the overall monitoring of corridor implementation and performance, conducted by the corridor coordinator.

POLIS and ERRIN, welcome the approach chosen for the SUMP requirements. It is a precise but flexible list of minimum standards, pointing effectively in the direction of the functional urban area as the focus for mobility planning.

However, there is still capacity to streamline the communication processes- perhaps involving the existing TEN-T portal TEN-TEC.

In addition, in the effective functioning of TEN-T, we propose that TEN-T measures should take into account effects on regional and local traffic flows, both for passengers and freight.

The new TEN-T legislation notes the importance of data collection by EU Member States (Article 40); however, we assert that Urban Nodes should be given higher importance in this process, “associated with establishment of the methodology for the data to be collected.”

At the same time a clearer understanding of ‘in the vicinity’ may be required (Article 40 (d). The requirement to develop at least one multimodal freight terminal by 31 December 2040 within or in the vicinity of the urban node, should imply that such infrastructures that serve several urban nodes can qualify to comply with the requirement.

You can read the full list of proposed amendments HERE. 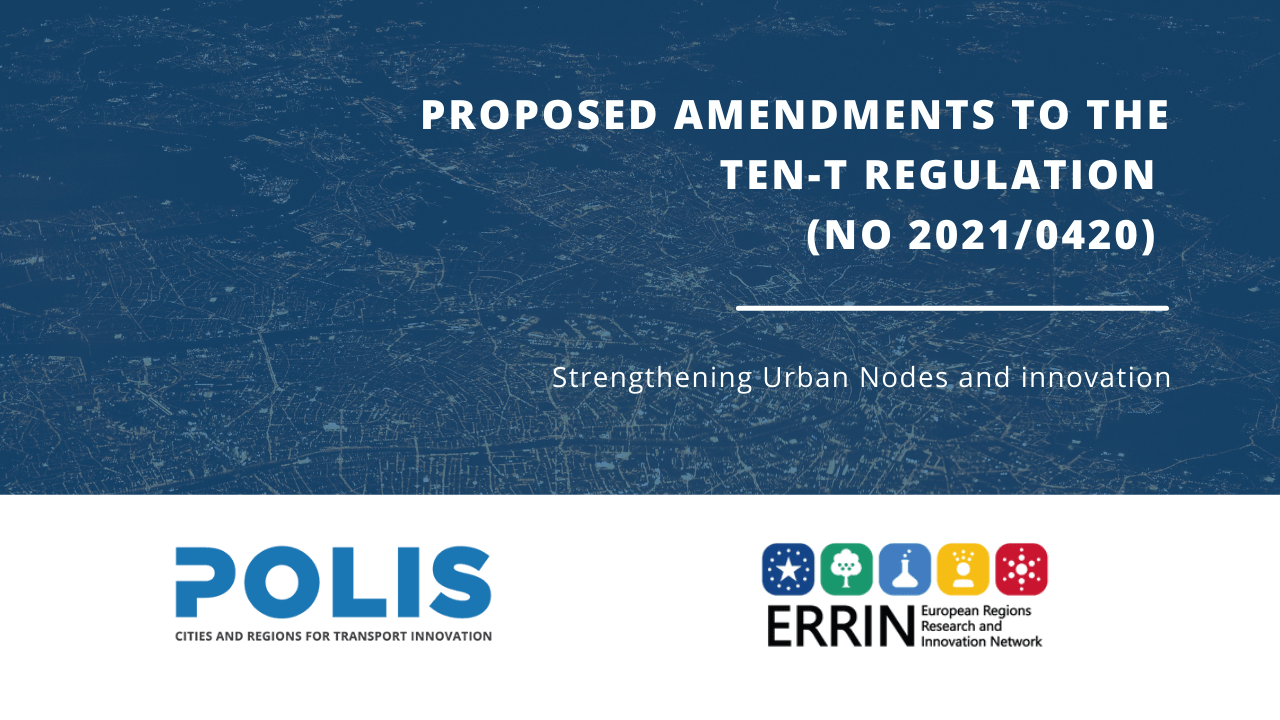 Strengthening urban nodes and innovation to enhance the capacity, sustainability, and competitiveness of the european transport system...
Download 29/06/2022
Back to news