The Municipality of Örebro is finding new ways to set mobility targets and map out action for change. Per Elvingson finds out how computer modelling of a new rapid bus service is helping the POLIS member city to realise its mobility goals.

It is easy to set bold sustainable mobility targets for our future cities. Implementing them, however, is harder. But this may be changing soon – starting with one of Sweden’s largest inland hubs. Örebro Municipality is located 200 km west of the capital Stockholm, in central Sweden. The region is home to 155.000 people, almost 80% of which live in the city itself. As the city has expanded, the development of sustainable, space-efficient and connected transport has risen to the top of its priorities – even though the Municipality has had modal split targets for already many years.

The current Mobility Plan of the hub aims to achieve 60% of trips using sustainable travel (walking, cycling, public transport) by the end of this year. With the share at 50% in 2017 and around 25% of all trips made by bike ,(making Örebro one of Sweden’s leading cycling cities), the target is well within the municipality’s sights.

Many measures have been implemented in the municipality over the last few years to help achieve these sustainability targets. Infrastructural improvements and public awareness campaigns encouraging walking, cycling and public transport have been at the core of this effort; however, travel habits have been tough to shift.

Additional and more comprehensive actions are required to change Örebro's modal split. At present, it is easy and relatively cheap to drive to and park in central parts of the city; meanwhile, better bicycle lanes and more frequent buses do not yet provide sufficient incentive to get drivers out of their car and onto the saddle. 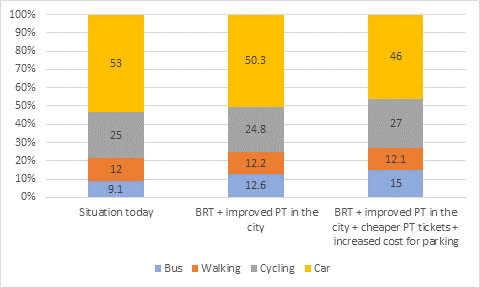 Getting to know Örebro!

Örebro is Sweden’s seventh largest municipality. The 750-year-old city is home to 143.000 people, 16% of which have a background outside Sweden, thus representing 165 different nationalities. Örebro is a university city and a logistics hub with good access to national road and rail networks. In 2008, Örebro established a Sustainable Urban Mobility Plan, and a revised SUMP for the city was adopted in 2014. The still ongoing plan includes objectives and general principles for traffic in the city, and serves as an umbrella for a cycling strategy, a parking policy and a programme to combat noise pollution. 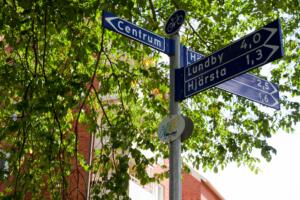 This is where visionary modelling comes in. In order to inform politicians, mobility industry representatives and residents about potential transport developments, Örebro is using a traffic modelling software, VISUM, to forecast the municipality’s mobility status in 2040. When using the model, it is assumed that current population trends will continue, leading to an increase in the number of inhabitants by as much as one third (+50,000 people) in the next 20 years. Additionally, the model presents and estimate of the distribution of all new inhabitants and workplaces in line with the municipality’s plan for spatial development. If current modal split continues into 2040, the number of car trips will increase proportional to the population. The result is not aesthetically pleasing. The VISUM traffic model shows severe congestion and an unattractive urban environment both for inhabitants and visitors. It is also calculated that due to projected population rise, even if current SUMP targets are met, the number of car trips after 2040 will exceed 2020’s figures.

Hitting the bull's eye with BRT

Quick and drastic measures are needed to avoid congestion and keep Örebro a healthy place to live within the SUMP targets. The BRT (Bus Rapid Transit) is one such measure. Early this year, Örebro Municipality and the Örebro County invested on a new BRT system for the city, with the first section expected to be completed by 2025 and costing €18-25m (half of which is provided through government funding). Tram lines had been discussed as an option but rejected due to the high cost required. The first part of the BRT system, with a total length of 7km, will follow the same route as Örebro’s most popular bus lane, and run on a separated lane and receive priority in traffic signals in the central parts of the city – as to create a system running faster than the car traffic while avoiding overcrowding.

Will BRT be enough to reach the SUMP targets?

Unfortunately, as illustrated by a modelling exercise carried out by consultant Urbanet Analyse, the BRT alone does not put Örebro on track to reach the SUMP targets. This model investigated the change in generalised costs for individual travellers and, according to this model, the BRT system will result in shorter travel times for bus passengers, yet only marginally extending car travel time, which will move a proportion of car drivers to public transport, but not a sufficient number to trigger comprehensive changes in Örebro’s modal split. 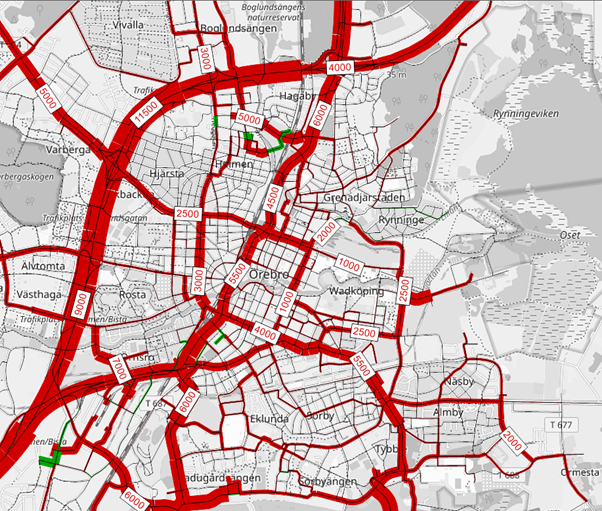 Simulated increase in number of cars in the central parts of Örebro by 2040 in the business-as-usual scenario, according to the VISUM model. Figures in the map represents number of additional cars per day, © Örebro Municipality

When more changes affecting the generalised cost are fed into the model, the effect on travel habits also increases. This therefore suggests that the BRT promises more sustainable travel/transport, but that the effect will be much higher when combined with with lower fares in public transport, further improvements in the city bus network, and a doubling of the current car parking charges in the city centre and at the university.

Visualisation of estimated traffic situation on Rudbecksgatan, one of the main roads leading into the city centre, by 2040, © Örebro Municipality

However, it appears even these interventions are not enough to reach the SUMP targets. The main conclusion from modelling of generalised costs is that extensive mobility measures must be implemented for tangible change in travel habits, a feat such modelling discussed here can help achieve.

PTV Visum is a software package for traffic analyses, forecasts and GIS-based data management on city, regional or national levels. It consistently models all transport modes and their interactions in a unified network data model. Sophisticated tools for management, import/export and editing of network elements, traffic demand and related datasets allow to efficiently build up large transport models.

Is BRT really the nirvana it promises to be?

Maps predicting future congestion problems and estimated effects of the BRT system have been used extensively in discussion with regional authorities and other public and private stakeholders. Indeed, it was the impetus for establishing the BRT. In Sweden, the regional body is responsible for planning and running public transport, while the municipality owns the infrastructure in the city. The municipality of Örebro is now preparing its own for the initial segment of the BRT system, and the Region is working on the buses and the necessary technology to support it, as well as an overall new structure for the whole bus network in the city. Furthermore, parking taxes will be increased substantially in central parts of the city from January 2021.

This increase will mostly target commuters who drive with private cars. In parallel, the municipality is working on further improving the existing walking and cycling infrastructure. But all that glisters is not gold. The BRT system has faced some opposition - namely, critics who claim that the overall project could be not only expensive, but also excessively penalising to car drivers.

Sustainable Urban Mobility Plan for the Municipality of Örebro

The mobility plan includes objectives and general principles for traffic in the city. The main objectives are:

The modelling results – together with visualization images – have been useful in presenting a different and more positive picture that further highlights the need to prioritise high-capacity transport modes in order to keep the city accessible for and to all. As the population of Örebro continues to grow, the city is eager to see the number of cars on the streets not following suit. Achieving this, however, requires strengthening modal split targets. And for this to happen, this game-changing decision needs to be taken together, and with an eye to the future.

Per Elvingson is a Spatial Planner at the Mobility Department of Örebro Municipality, per.elvingson@orebro.se 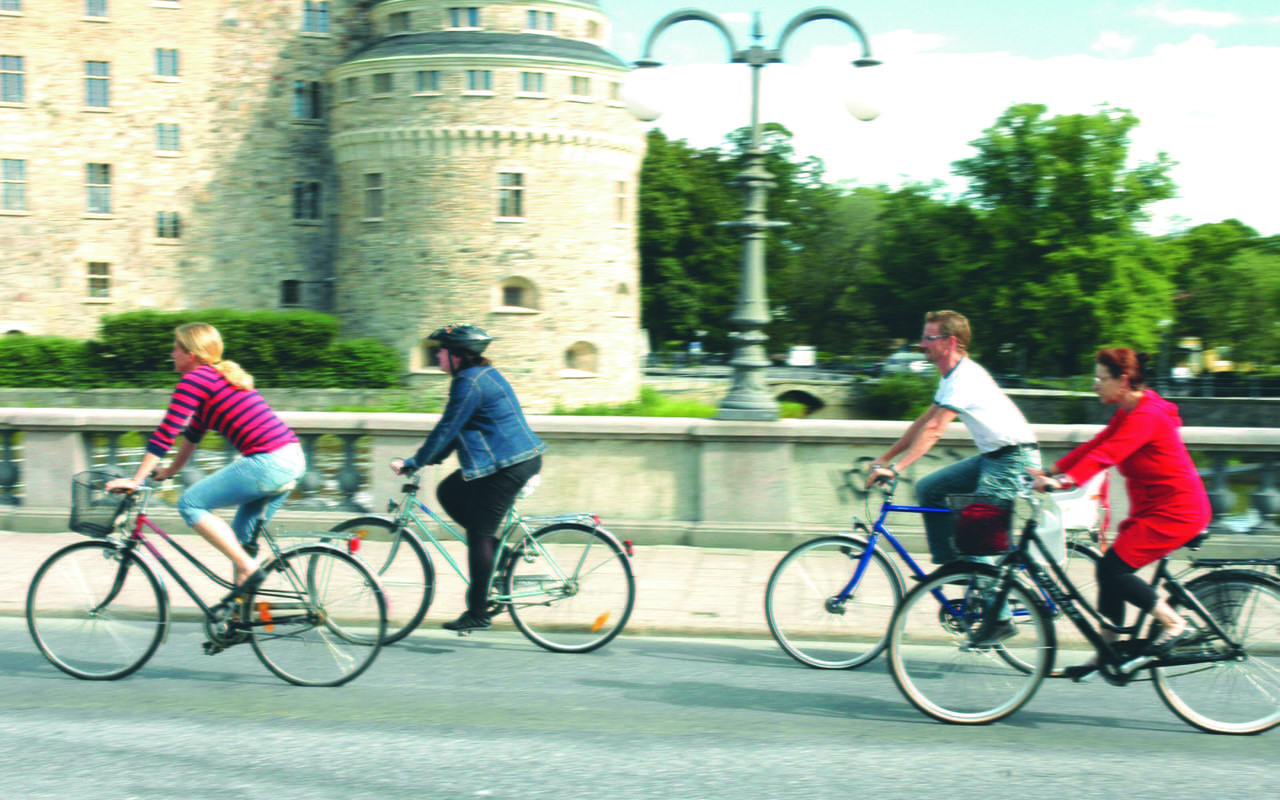 Staff member(s)
Örebro
Back to Invest in the Future: Örebro’s mobility models