Getting out of the house, stepping into your car, telling it to go to the office, while leaning back and reading the newspaper or starting to sort your emails, just to arrive at work with a relaxed smile on your face.

This autonomous driving utopia has been sold to consumers by many car manufacturers. As always, reality turns out to be more difficult than the ideas of the advertising industry. The development of first driving assistance features, such as lane- or distance-assistance, help many drivers to avoid accidents, but a commute through busy streets of densely populated European cities can still be very stressful. Nevertheless, technology is advancing, and the autonomy level of passenger cars is increasing.

This progression from a standard car to a fully autonomous vehicle (AV) starts with vehicles, which are equipped with driver assistance, such as lane following modes and distance measurement. In more advanced stages of automation, the driver can take the hands off the steering wheel for a short time. Once full autonomy is reached, experts differentiate between the areas in which vehicles can drive autonomously. Starting from autonomy in ideal conditions, followed by a next step, which includes autonomous driving in specific environments and finally; full autonomy on every street. Thus, anyone who has driven a car with the most modern technology will know that the road towards autonomous driving is long and full of obstacles

Impacts on traffic and use of public transport:

The three-year EU-funded project assessed various scenarios for autonomous vehicles in the four cities of Gothenburg (SE), Helmond (NL), Stuttgart (DE) and Milton Keynes (UK), by using micro and macro traffic/travel demand modelling tools. In each of the four cities, two scenarios have been evaluated, based on the most urgent traffic needs of each city. These include microscopic scenarios like roundabouts, signalised intersections, highways, shared spaces and others. Additional assessments focus on the wider picture by making predictions about the influence of autonomous vehicles on the future use of public transport.

For more information, check out: https://www.h2020-coexist.eu 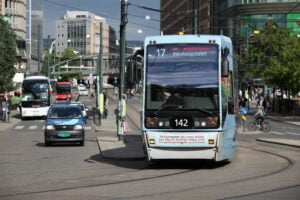 A tram in Oslo: © Carlos Corao

We often forget how difficult driving can be. Accessing and exiting highways and roundabouts, following merging lanes or driving slowly through a shared space with plenty of pedestrians and cyclists – there are many reasons why passing the driver’s test can take many hours. Besides clear traffic rules, a great amount of human interaction is often required to master traffic, such as hand gestures, signalling or even honking.

Overly cautious AVs reduce traffic flows in shared spaces One of the four test cities, Gothenburg, has a significant number of cyclists, especially in shared spaces in the city centre. These traffic situations were simulated with computer models, which helped to draw a few conclusions. An increase in safety for pedestrians and cyclists was observed, as they always have the right of way when interacting with autonomous cars in a shared space. Additionally, the strict speed compliance of AVs further reduces the risks of accidents and enhances the predictability of the vehicles in comparison to conventional cars.

Nevertheless, the average speed of vehicles reduced drastically, due to strict safety measures of AVs, which are especially present in vehicles with low levels of automation. Further problems occurred with the simulated introduction of zebra crossings, which significantly slowed down the AV traffic, as safety features hampered a quick reaction and acceleration of the vehicle once the zebra crossing is free. This shows that low levels of automation, in which AVs normally stop when anything is on the collision course of the pre-defined path, can reduce traffic flows significantly. This so-called rail-safe driving logic is the most basic level of automation.

AVs in roundabouts are obstacles for smooth traffic flows Quick decision-making and understanding of traffic flows are also very important when entering and exiting roundabouts. If cities like Milton Keynes, the project's UK partner, have mainly used roundabouts to manage intersections, low level AVs could create traffic jams and significant delays. Therefore, the British city, which was founded in the 1960s, makes it an ideal testing ground to assess how autonomous vehicles might interact within intersection spaces. A closer look is taken on possible necessary infrastructure measures to facilitate the arrival of CAVs. After a baseline assessment, the modelling tool was used to introduce a third lane for the roundabouts. In a second step, the AVs in the computer model were equipped with vehicle-to-vehicle communication technology. Results of the test confirmed expectations that even a small number of vehicles causes massive delays. Only at an advanced stage of automation, one can observe improvements. 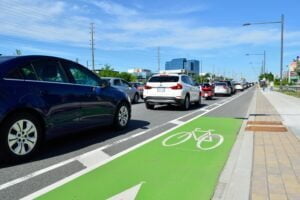 Overall, already the two examples show that low-level automation can significantly hamper traffic flows. Other road users can benefit from the safety programming of AVs, as observed in the shared space example. Once traffic rules are favourable to AVs, other road users could face delays, as seen in the assessment of the signalised intersection in the Dutch project partner city of Helmond. The intersection offered pedestrians and cyclists a safe way to cross a busy street. The introduction of AVs also introduced adaptive signal control, which allocated longer green times to vehicles. Thus, travel flows for other road users were reduced.

The scale can tip both ways

As mentioned in the introductory example, perception of travel time is quite important. If travel time is perceived short, it probably increases the attractiveness of AVs, as passengers of elaborate AVs can spend their time in the vehicle for non-driving tasks, such as phone calls, reading or watching a movie. 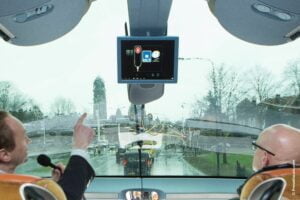 Assessments of the Stuttgart use cases show that drivers are willing to spend up to nearly 20% longer in the car if high automation stages are reached, which are readily available on highways and on other main roads. This creates a favourable case for high-level AVs and therefore would increase the number of cars on the roads, if the high price for such a vehicle were not an issue.. If high-level AV cars were to be integrated into the public transport system, it could increase the total share of public transport by 19% in Stuttgart, from 14% up to 33%. Simultaneously, while the car share in the modal split would reduce by 13%, from 54% to 41%. The numbers show that shared AVs would boost the attractiveness of public transport, as AVs facilitate access to the public transport system and enhance the level of comfort.

The numbers for Stuttgart also highlight that the willingness of car owners to give up their car in favour of a shared vehicle service is essential for the success. If 50% of car owners give up their car, it would reduce the vehicle kilometres travelled by 25%. The number of required vehicles can be further reduced, if ridesharing integrated into public transport and carsharing is available. In this case, up to 25% of all vehicles can be omitted. This number can be further reduced with an increasing willingness to share.

Overall, it has been observed that AVs can provide significant opportunities for private car use, which would cut down congestion and overall parking space needed in cities like Stuttgart.

The AV has a long and winding road ahead

The main takeaway of the CoEXist project is that traffic flows mainly improve, once high automation and penetration levels are reached. The lofty and bright expectations of high level autonomous and connected vehicles are now considered as in a more down-to-earth manner.

Thanks to the comprehensive assessment of a wide range of traffic scenarios by the CoExist project, city administrations can use the created guidelines for assessing the individual situation regarding infrastructure investment and traffic management. Even though studies have shown that autonomous vehicles are still in their infancy, this fortunately prolongs the planning preparation phase for cities. 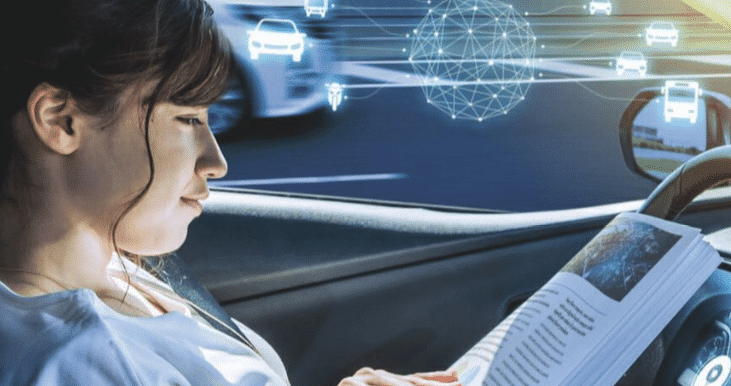