All will be ReVeALed

All will be ReVeALed

How cities can learn to fall in love with Urban Vehicle Access Regulations: through its ‘matching’ Transition Framework, ReVeAL will guide cities on how to become more liveable

With almost 70 per cent of the world’s population expected to be living in urban areas by 2050, the task of making cities not only accessible but above all liveable, is becoming essential. It is indeed a truth universally acknowledged that cities are becoming more and more of a social and economic magnet: jobs, housing and services aggregate at once, and we, the people, are attracted to these magnetic fields as if we were metallic objects.

However, the unprecedented increase in population, rather than entice, does scare most – especially authorities, urban and mobility planners and city managers, who are consistently challenged with new risks concerning congestion, air pollution, noise levels, accessibility and infrastructural damage. To cope with these urban pressures, cities around the world are trying to take a stand where it is needed – and regulating the vehicles or trips that access parts of the urban area is one for the ages.

Urban Vehicle Access Regulations, also known by the acronym UVARs, can be defined as ‘measures to regulate vehicular access to urban infrastructure1’ – a wide spectrum of techniques and actions that cities can adopt to tackle urban traffic related issues. Low and Zero-Emission Zones, spatial interventions, pricing measures and other emerging technologies fall in this category and cities can leverage them to improve urban environments and citizens’ lives.

It may, therefore, come as something as a surprise to learn that UVAR schemes have not only become a highly relevant theme in the day-to-day conversation of most European cities, but also a very controversial one. Usually, authorities see them as useful tools and regulations, while citizens, particularly vehicle and business owners, perceive them more as restrictions or bans. The former see the “do’s”; the latter see the “don’ts”: a one-sided relationship, to say the least.

In addition, examples of both successful and unsuccessful implementations are numerous and set the ground for further contention. Cities focus on successful implementations in the hope that, by blandly replicating good practices, the chances of a positive outcome of their own UVAR measures would increase. However, many factors play a role in the success of UVARs and factors that are intrinsic to each city need to be understood in order to determine if a specific practice is applicable or not, case by case.

Understand your city and then transform it

The key to a successful UVAR is understanding the context of the city where there is a need and will to implement it. Identifying the different variables of the city affecting – in one way or another – the UVAR implementation and assessing the maturity of the city with respect to the lifecycle of its proposed UVAR measure are then the main steps to undertake to clarify the possible following paths that will result into a successful and targeted implementation.

It is in this moment that the ReVeAL (REgulating VEhicle Access for improved Liveability) transition framework comes into place. It groups the key procedural and contextual factors affecting the development of an UVAR measure into four areas, capturing the processes that take place within and between these areas along the UVAR lifecycle (see The UVAR Lifecycle box). Its mapping thus leads to the explicit understanding of the transitions that these four areas may undertake within a specific context and help identify the different paths that could be covered.

The four transition areas are:

In 2006, Stockholm introduced the congestion tax, a time-of-day dependent cordon-based congestion charging system with the aim of reducing traffic and congestion, enhance accessibility, and improve the environment. The measure was initially launched as a half-year trial followed by a public referendum in which 53 per cent of the citizens supported the measure.

Along the same lines, on the first day of 2013, Gothenburg introduced its congestion tax. This with the aim of alleviating congestion, improve air quality, and generate revenues for transport infrastructure. Several consultants, officials, and Stockholm experts were participants in the design. At the end, and just as in Stockholm, the system consisted of a single cordon surrounding the city.

In 2014, 20 months after the introduction of the Gothenburg congestion tax, a local referendum was held, with a 57 per cent of the citizens voting against the congestion tax. These results were finally withdrawn by the city’s government arguing the lack of policy alternatives to replace the congestion system. 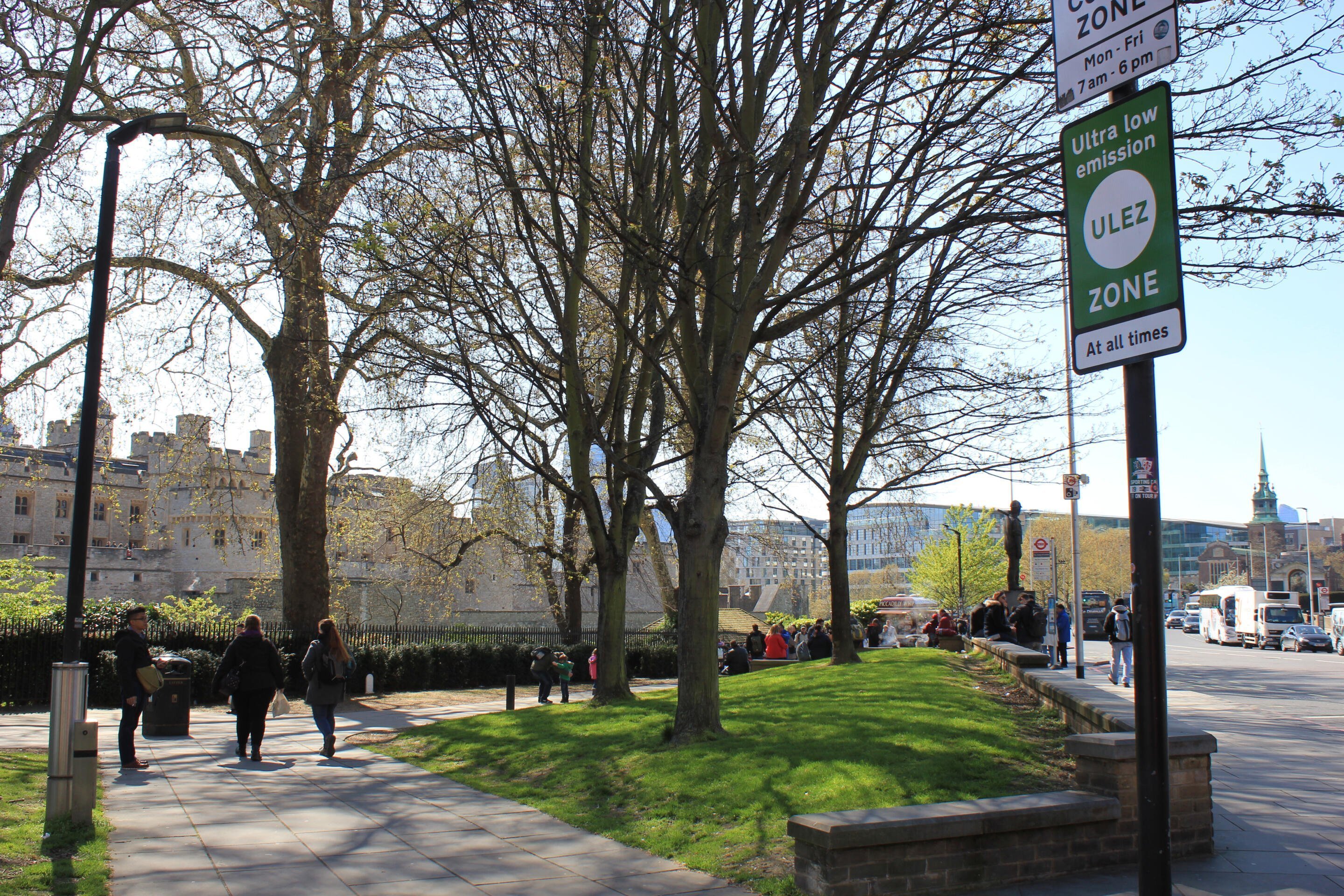 ULEZ in London: Low Emission Zones are often the most effective measure that towns and cities can take to improve air pollution

The implementation of the congestion tax in these two cities is the perfect example of how two cities with relatively the same cultural, social, and legal context, may display different processes with different outcomes – in terms of political and public acceptance. This showcase how important results to consider the various procedural and contextual factors in order to reach a successful UVAR implementation in a specific city.

Who has a voice in the decision process? How are decisions made? And who is being held accountable once a decision has been made?2 Governance, as defined by the OECD, is ‘the exercise of political, economic and administrative authority necessary to manage a nation’s affairs3’ and characterised by ‘participation, transparency, accountability rule of law, effectiveness, equity etc.4’

Within the ReVeAL transition framework, good governance implies transparent procedures for project management, and procurement and allocation of revenues at the local level. It also brings to life policy and operational coordination between different levels of government and translates into a professional project management of the UVAR scheme, with long-term measures that are institutionally anchored to agencies or public-private partnerships.

More specifically, financing within the ReVeAL transition framework requires the very same kind of transparency that good governance should already bring to the table. Referring to the way UVAR measures are funded and revenue streams are used, transparent financial allocation is indeed an important asset to UVAR implementation, as the understanding of how revenue streams from UVAR (from fines or fee collection) are spent improves the citizens’ acceptance of the scheme.

The quid pro quo of user acceptance and political consensus

Within ReVeAL, user needs refer to the identification of the degree to which users can understand how an UVAR functions, while city managers and authorities assess and monitor the social, economic and demographic differences among them. Throughout the process, communication and engagement with the targeted user groups result essential to understand and explain the new scheme and make user needs to be heard.

User acceptance is then the willingness within a group to use a UVAR system or measure for the tasks for which it was designed, and it is affected by the design characteristics of policy measures and individual mechanisms of reception and elaboration. Unsurprisingly, it relates also to political acceptance: thus, understanding how user acceptance develops over time is essential for creating political acceptance/consensus.

Monitoring and measuring public acceptance should also be performed periodically and adaptations can be proposed by users. In doing so, it is important to understand and address questions regarding equity, fairness and self-interest and how it affects level of acceptance in both policy design and communication. Specifically, equity refers to how the costs and benefits resulting from a measure are distributed over the population, whereas perceptions of fairness are individual. 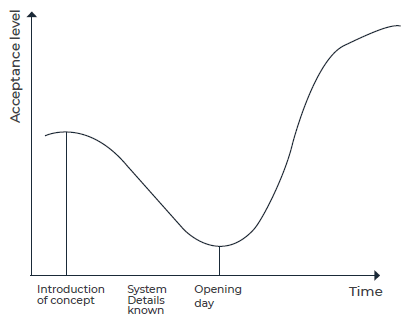 The phases correspond to different periods of time that involve a set of activities and processes, whilst the gates are specific points in time defined by a set of specific events that determine the passing or nor to the following phase. The four phases and three gates are defined as:

MaaS (Mobility as a Service), automated and/or electric shuttles, new public transport options, ride hailing platforms, application of C-ITS (Cooperative Intelligent Transport Systems), shared bikes, cars, vans and mopeds, (cycle) logistics schemes: these are just some of the mobility services and concepts that can support the ideation, implementation and operation of a specific (or a set of) UVAR measure(s) in a city/metropolitan area within the ReVeAL framework , in combination with existing elements, such as active mobility and public transport.

This stream of functions and measures should then be harmonised with the availability, functionality, and status of UVAR-related systems – and the technologies that make up these systems – in a city throughout the UVAR life cycle, also known as the system design/technology transition area. Clusters of this part of the project are, as following:

The Art of Matching

UVARs are not everyone’s cup of tea, but that does not mean that they cannot find a city that will love and cherish them. For as much as the ReVeAL transition framework is an adaptation of a multi-stage and multi-stream model, where politics, policies, and problems are intertwined and matched with the public policy process itself to maximise the suitability, adaptability and replicability of UVAR measures, it is also a clear way to harmonise cities and UVARs in a proactive and successful relationship.

This harmonisation – which works as a sort of coupling/matching, finds its strength into the assessment of each and every city involved, thus facilitating comparison between different cities, identifying the specific contexts and common transition paths that could be then followed and replicated.

It is a targeted guidance, a non-arbitrary Cupid’s arrow that matches the intrinsic characteristics of a city to the most suitable UVAR measures alternatives and, actually, does The Magic. 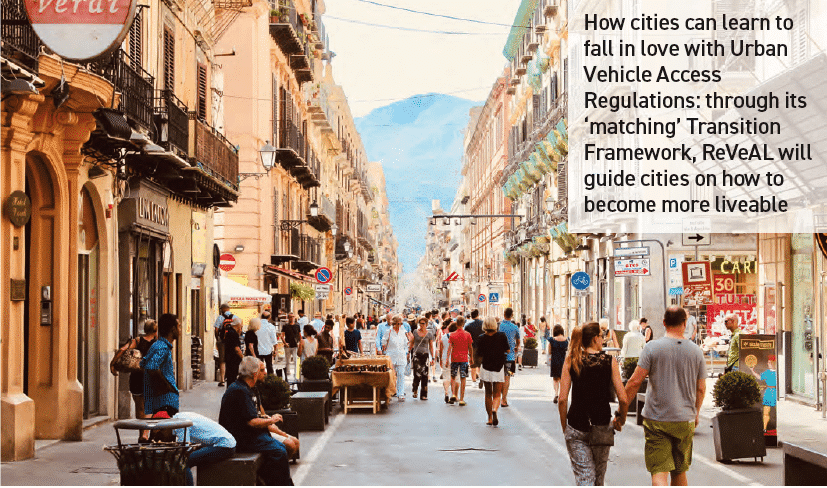