All too wheel, all too real

All too wheel, all too real

Over a number of years there has been great concern about the number of motorcycle riders that are seriously injured and/or killed on London’s roads.

Many advertising campaigns have been carried out nationally and regionally, reminding us of the need to ‘Look out for bikes’, ‘Slow Down’ and ‘Think Bike’ – the list goes on. The team in the London Borough of Lewisham wanted to know more about this issue. As part of London’s Vision Zero target of no deaths or serious injuries by 2041, it was felt that more information was needed to enable a new targeted programme of rider support to help to improve the awareness and the ability to anticipate the actions of other road users for the young, new rider. But who were we targeting? 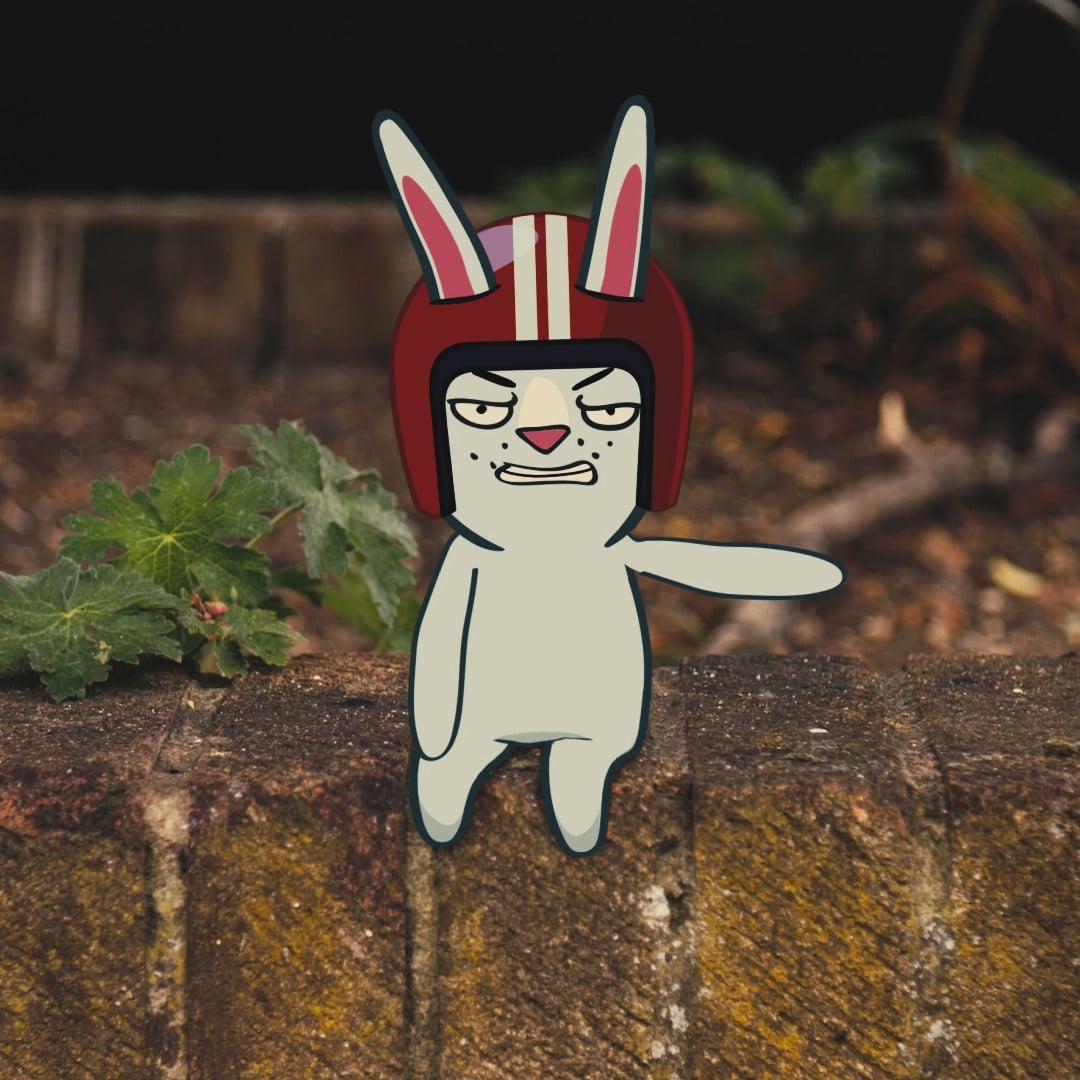 Before launching into spending public money on an advertising campaign we commissioned a detailed Motorcycle Insight Study, Road Safety Analysis completed a study so we could fully understand motorcyclists, the reasons for the casualty numbers and most importantly how we can make it safer and how we can work towards Vision Zero in London. We were keen to create a targeted campaign that would be fully evaluated.

It is very simplistic to believe that a campaign targeting motorcyclists would reach all riders. The in-depth studies showed very different personas of rider even in close geographical areas. Four boroughs showed quite different types of riders, reasons they ride and background.

It is very simplistic to believe that a campaign targeting motorcyclists would reach all riders. The in-depth studies showed very different personas of rider even in close geographical areas.

So, in four London Boroughs, not so far apart from each other (no more than 11 miles), the only similarity is the size of the bike and the age of the rider. This confirmed that to deliver a targeted campaign, messages would need to be bespoke and tweaked to suit the local rider. The aim is for the messages to resonate with the persona of the rider we want to reach, meaning that one campaign would not necessarily target all of the riders most at risk. Indeed, although they ride the same bikes, that is all they share. We should never assume that the audience are the same purely because of a shared mode of transport. 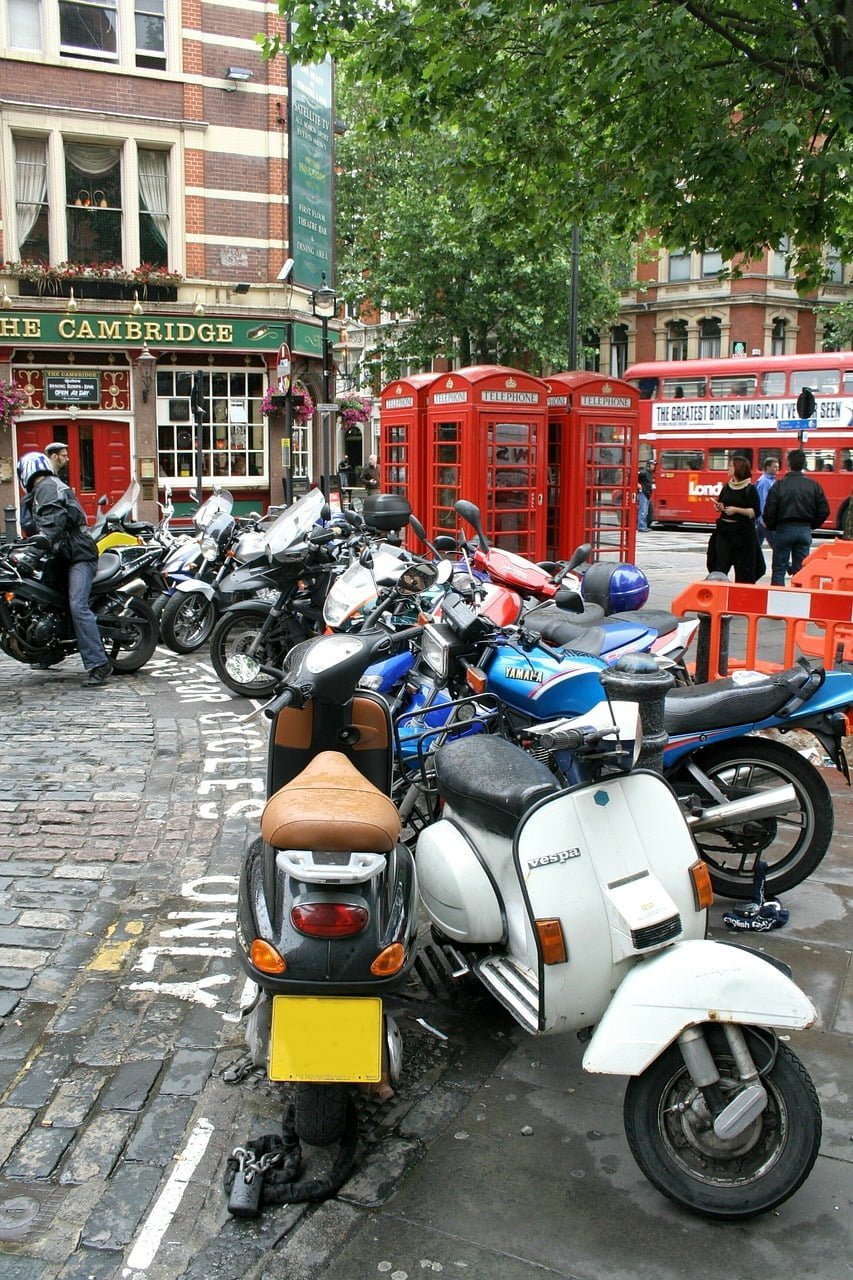 Motorcycling - a growing market in London

But, how do we ‘reach’ our riders?

For Lewisham, the target audience was a new young rider, aged between 18 and 25, riding on a provisional licence, having only taken a ‘Compulsory Basic Training’ (CBT) certificate to ride legally on the road.

A CBT takes place over a one-day period, giving very little time to cover important areas such as anticipation, hazard perception and knowing how to apply the rules of the Highway Code. So, using the data from the in-depth study, we produced a pre-CBT course.

As the riders in Lewisham were more likely to be commuters, it was important to offer something that would appeal to them, be worthwhile and incentivise them to take part. We looked at what could be offered to ‘teach experience’, encourage riders to learn the Highway Code, even when they are not necessarily required to, in order to pass a test.

How do we make it worth their while? A CBT costs in the region of £140 (€142), so an offer of a 50 percent discount on a CBT assessment day, to any rider that participates in a two-hour training session is of good value, and more than someone could earn in the time the course takes to travel to and attend.

For Lewisham, the target audience was a new young rider aged between 18 and 25, riding on a provisional licence, having only taken a 'Compulsory Basic Training' (CBT) certificate to ride legally on the road

The Lewisham CBT provider London Motorcycle Rider Training, (LMRT) offered a 50 percent discount on a CBT certificate for attending a two-hour presentation on their website, so we didn’t advertise only to those that were already wanting to ride a bike and had contacted the local provider.

We know that new riders are at a greater ‘risk’ due to their lack of experience. The intervention we offer aims to widen their experience and to develop the rider’s own self-evaluation skills, while providing them with basic information relating to bike maintenance, protective personal equipment and a greater understanding of how alcohol and drugs can impair a rider’s ability.

By giving a new rider tools to improve their ability to predict the likely actions of other roads users and to increase their ability to learn form their own riding experience, we give them the tools to self-reflect. The initial intervention was a classroom based two-hour session, using a number of behavioural change models, all of which can be incorporated within the three core elements of the COM-B model. 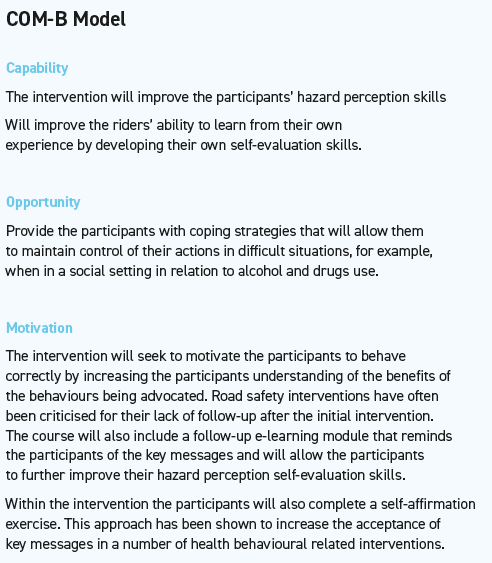 In the first two years, over 250 riders attended the sessions, but we were losing participants due to the times of the classes, their availability and their location. Thus, we developed an online module, where each element has to be finished before a fully completed course notification is given to the CBT provider, so participants cannot jump through it.

The online module offers young riders additional information to help them as they start their riding life.

Every employer engaged in the programme provides a point of contact with their company. They are responsible to cascade the information out to their employees/colleagues. The employers tool kit comprises of posters, leaflets and up to date information

In addition to the CBT intervention, Lewisham is a member of 2 Wheel London, a London Borough partnership working together to improve the information given to motorcyclists and help to offer safety messages to riders through their workplaces and on social media channels.

2 Wheel London is an employer led initiative offered to employers in membership boroughs as part of the programme riders who either ride to work or as part of their job, are provided with tips and advice throughout the year to help them stay safe. Each employer in the borough provides a point of contact for the all email information to be sent to, they then cascade the emails to riders in their company and a tool kit is offered with posters and up to date news to help raise an awareness of bikes to all road users. 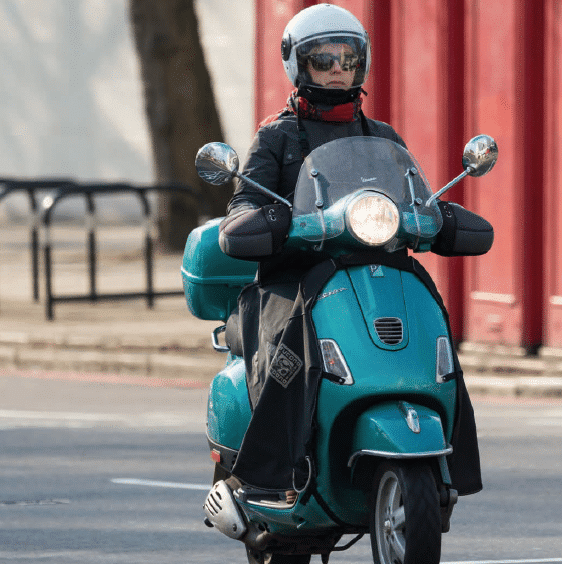 Topics
Mobility management and campaigns Road safety Vehicle safety
Back to All too wheel, all too real