"The Twente region, in the east of the Netherlands, is a diverse area with cities, suburbs, villages and rural parts. Regio Twente is developing a new connection for this area, the F35 bicycle highway. Thinking Cities’ Ralf Tinga travelled to Twente to give the F35 a try."

The F35 connects urban areas and runs along the most beautiful nature of Twente; a very relaxing way of going to work

F35 is a nod to the A35, a regional motorway that connects Twente’s main cities Almelo, Hengelo and Enschede. The ‘F’ refers to ‘fiets’, the Dutch word for bicycle. The F35 bicycle highway is meant as an attractive alternative to urban and regional car traffic. Despite the local population’s enthusiasm for cycling – 32 per cent of the journeys in the region are made by bike – car traffic is on the rise in the region.

Around 30 per cent of the 62 kilometre bicycle highway has been completed, with Regio Twente planning to finish construction in 2020.

We try the F35 on a sunny Saturday in October. This is not a weekday rush hour, but it is an ideal day for recreational cycling. With a slight wind at our back, we head from downtown Hengelo in the direction of Enschede. The F35 truly resembles a highway: the asphalt is broad and smooth and we stop at only a few crossings. The path gives enough space on both sides to ride next to each other. Two cyclists in front of us are engaged in a casual conversation.

We pass new and old residential neighbourhoods, parks, playgrounds, industrial heritage, business parks and a university campus. All walks of life appear to use the highway, including the elderly, youth, students, and parents with children. While the F35’s main track runs between Twente’s larger cities Almelo, Hengelo and Enschede, it also connects smaller towns, like Borne and Wierden and, in the future, Oldenzaal and Vriezenveen. This connection between cities, villages and public facilities gives the highway an important economic and social function. 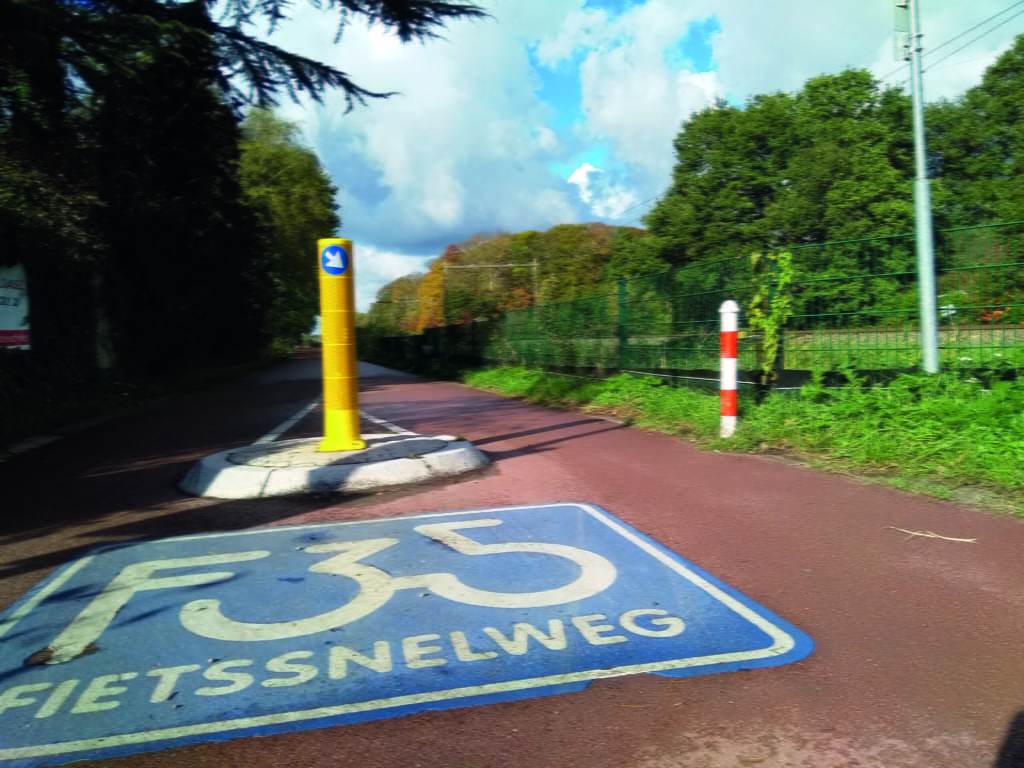 The F35 also encourages recreation. We pass a pop music stage, ice rink, cinema, athletics fields and a football stadium. All of them are well-connected to the bicycle highway. This makes the F35 an alternative to the car when going to a big event. Cycling over the F35 itself also appears to be a pleasant experience. Thanks to the absence of traffic and the limited number of crossings, we roll along smoothly and carelessly. Signposting and road markings are clear, while at the Enschede Kennispark railway station, we find parking space and a place to rest.

Cyclists on the F35 take full advantage of its course along the railway tracks. It runs along city centres and areas around railway stations that are hubs in the F35 network. This makes it convenient for cyclists to transfer to the bus or train, or to head downtown. At the railway station Enschede Kennispark, the platform is a matter of a few steps away from the bike path.

The strip of free space along the railway tracks also allows for the generous width of 4-4.5 metres. The increased popularity of e-bikes is essential to this design. E-bikes ride at higher speeds and impose new requirements on cycling infrastructure, notably wider dimensions and fewer crossings. The track benefits from under and overpasses between railways and roads, benefitting both speed and safety. 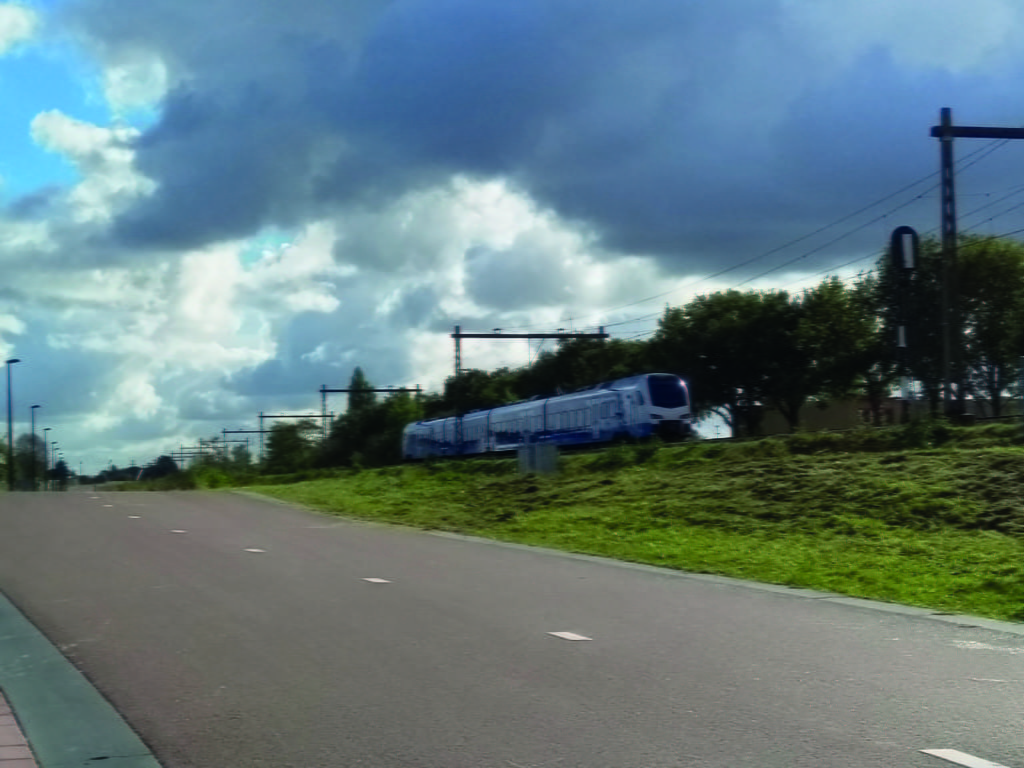 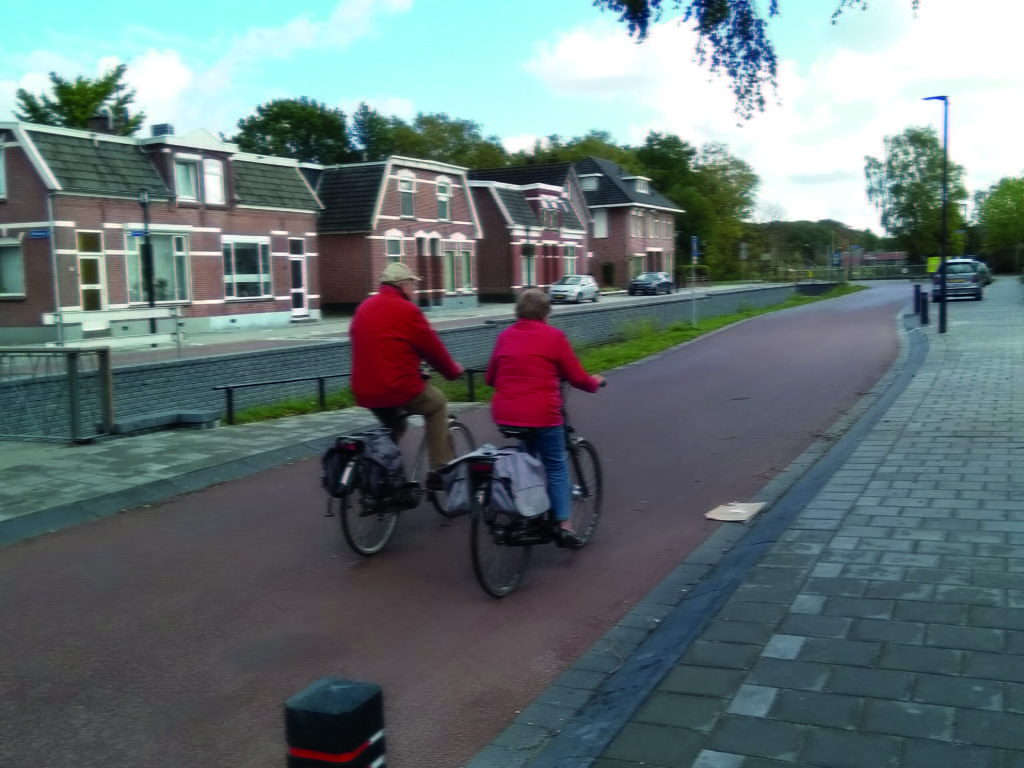