Open for business? Making car-free city centres work for everyone

Open for business? Making car-free city centres work for everyone

More and more cities are seeking to remove cars from their centres, but opposition from business can be a major barrier. Jamie Wylie sets out the experience of Oslo to show how cities can make car-free planning work better for everyone, including businesses.

There’s no doubt that in most cities, the car is still king.

Mid- to late-20th century city planning largely placed priority on cars, radically transforming the face of cities and indeed influencing the very lifestyles of people, essentially forcing many into car ownership. Whilst cars have undoubtedly delivered benefits for society, prioritising private vehicles in cities has caused a plethora of problems for people that live there: Air pollution, congestion, carbon emissions and physical inactivity to name but a few. The car may still sit upon the transport throne in most places, but a growing number of cities are beginning to tackle the dominance of cars and re-balance urban transport. There are many ways to achieve this -- congestion charges, parking levies and mass cycling infrastructure to name but three examples that are becoming more and more common. But some cities are pursuing something even more transformative: the car-free city centre. A host of towns and cities across Europe already have de facto car-free areas in their centres - many thanks to their historic, narrow streets not being suited to cars - but there’s a growing popularity of going one step further by transforming city centres into spaces for people. It’s important to note that ‘car-free’ doesn’t really mean ‘no cars’. Rather, it’s about creating city centres which put people and public transport ahead of movement by car, implementing measures to minimise car use and make sustainable modes of transport as easy and attractive as possible.

Oslo has become something of a poster boy for cities seeking a car-free future. Prior to its car-free city centre ambitions, Oslo was already doing well by most cities’ standards when it came to urban mobility. The city has an extensive tram, bus and metro network, with public transport accounting for over 60% of journeys, with ambitions to go further still. Oslo is the electric vehicle capital of the world, with over 20% of vehicles in the city being EVs. The city also has strong targets in place for cycling, aiming for 25% of journeys to be made by bike by 2025. But the municipality wanted to go one step further.

Back in 2015, following the election of a new governing coalition, Oslo Kommune announced its intention to create a new car-free city centre by 2019. The ‘Car-Free Liveability Programme’ was subsequently launched, principally aiming to create more ‘city life’ in Oslo by designing a more attractive and liveable city centre where people were able to, and wanted to, spend time. Starting in 2017, the two years following saw major changes to the centre of Oslo, with a rapid but staggered transformation of streets and public spaces. Some 700 public parking spaces have been removed, whilst new dedicated parking spaces for people with disabilities, tradespeople and delivery vehicles are now in place. 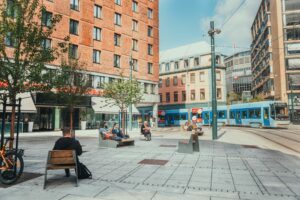 Pedestrian zones have been extended, cycle lanes have been rolled out and public transport has been given greater priority throughout the city. New measures to create a more attractive and welcoming city centre have been introduced, including public seating, play areas, street trees, public toilets and more. In less than three years, Oslo has undertaken changes that some cities have taken decades to achieve. Oslo has been widely praised in international media for its efforts, and rightly so. It’s proving to be an inspiration for other cities to follow suit. But dig a little deeper, and the supposed car-free utopia has had some problems along the way.

Opposition to the Car-Free Liveability Programme

No sooner were plans for the car-free city centre announced than opposition arose to the Car-Free Liveability Programme. Political parties outside of the governing coalition raised objections regarding the impact on people who currently used cars in and around the city centre (though these objections were later scaled back). Some citizens also raised concerns regarding what changes would be taking place and how travel into the city would be affected. But most of the opposition to the Car-Free Liveability Programme has come from another group: businesses.

One of the main criticisms commonly thrown at projects aiming to reduce car use in cities is their supposed impact on businesses and economic activity. Despite ample evidence that prioritising movement on foot, bike and public transport can actually increase business activity and revitalise local economies, businesses are routinely found to oppose car-free projects. Oslo was no different: The majority of businesses surveyed by Oslo Kommune in 2018 opposed the Car-Free Liveability Programme. Given the political significance of businesses as employers and contributors to economic activity, it’s unsurprising that getting these projects right for businesses is of great importance for their political acceptability.

So what can be done to make car-free city centre projects more palatable for businesses and ensure that their needs are met? Perhaps unsurprisingly, there’s no silver bullet for reducing business opposition to these schemes. But that doesn’t mean that car-free city centres can’t work for businesses. On closer inspection in Oslo, opposition to the Car-Free Liveability Programme appears to have arisen from a few key issues, most of which relate to how the project has been managed and implemented, rather than the premise of reducing car use. Many of the points of objection - such as a lack of consultation and communication about the planned changes, and issues with the rate at which measures were implemented - can hypothetically be resolved by improving the design and implementation of car-free city centre projects. 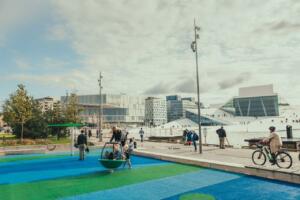 Recognising the role of business as an integral part of city centres is vital. Municipalities need to closely involve and engage businesses throughout the development of the car-free city centre to ensure that concerns are captured and solutions are integrated into the project. Additionally, working closely with business organisations is important in building trust and cooperation between the business community and the municipality. Finding compromises, particularly on matters of delivery access, is crucial to showing businesses that the municipality wants to make proposals work for businesses, and that their views are valued in these discussions.

Introducing measures to make the city centre a more attractive place early on appears key to easing business concerns. Ensuring that the benefits of car-free projects - such as more public space, more seating, greenery and other measures to create an attractive environment - are introduced alongside measures such as the removal of parking spaces is key to showing people what the project is trying to achieve and what the new normal could look like. However, care should be taken to trial and test measures, getting feedback from citizens and business stakeholders on the success and value of these measures.

Setting out a clear and consistent communication strategy in the early part of the process is key for ensuring that all stakeholders are kept informed and engaged with the project. In particular, this appears important in providing more certainty and stability for the business environment in the city. Focusing communications around project objectives that multiple stakeholders have an interest in - such as creating a more attractive city centre - and promoting the benefits of reducing car use could also be an important means of getting people on board with the project. Municipalities should also make an active effort to document the changes being made as they are happening, so that businesses and citizens alike can see what benefits the project is delivering on-the-ground. 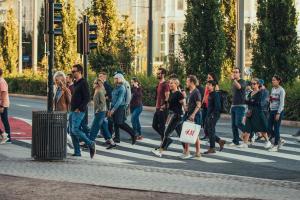 Municipalities should aim to gather and monitor data on the economic impact of a car-free city centre. After a period of discussion with the business community, Oslo Kommune implemented the ‘city accountancy’ (‘byregnskap’) tool to more closely monitor the economic impact of the car-free project, something that was welcomed by the business community. This is a potentially complex task, but provides valuable insight into the impact of changes to different areas of the city centre and appears important in easing concerns of businesses. In the event that negative economic impacts do occur, this allows problems to be identified quickly and solutions to be implemented in response.

Integrating a car-free city centre within the wider context of a city is vital in achieving a coordinated and holistic approach to addressing a number of issues in a city. In particular, ensuring that the car-free project is well integrated into wider strategies for the economy, housing, planning and transport is key to maximising the potential of these projects. For example, thinking about how public transport needs to be adapted in response - such as creating better bus and tram connections near car parks - is vital to ensuring that good access can be maintained going into the city. Additionally, ensuring that businesses can make best use of the space outside their premises, such as having seating or attractions to draw people in, can help to create a more vibrant and successful city centre.

A blueprint for the future?

Oslo is an excellent example of how real change can be delivered in a short space of time to create an attractive and successful city. Ultimately, disagreements and conflicts will occur when transforming city centres into more liveable places, however there’s a lot of common ground to be found: after all, everyone wants to live in a happy, healthy, attractive and successful city. Working together is the only way to make that a reality. Yes, Oslo hasn’t got everything right in its journey to a car-free future, but the Norwegian capital has shown other cities that putting people first in cities is not only possible, but it is preferable for a whole host of reasons. Other cities should now look to learn from the case of Oslo and create city centres that work better for everyone. 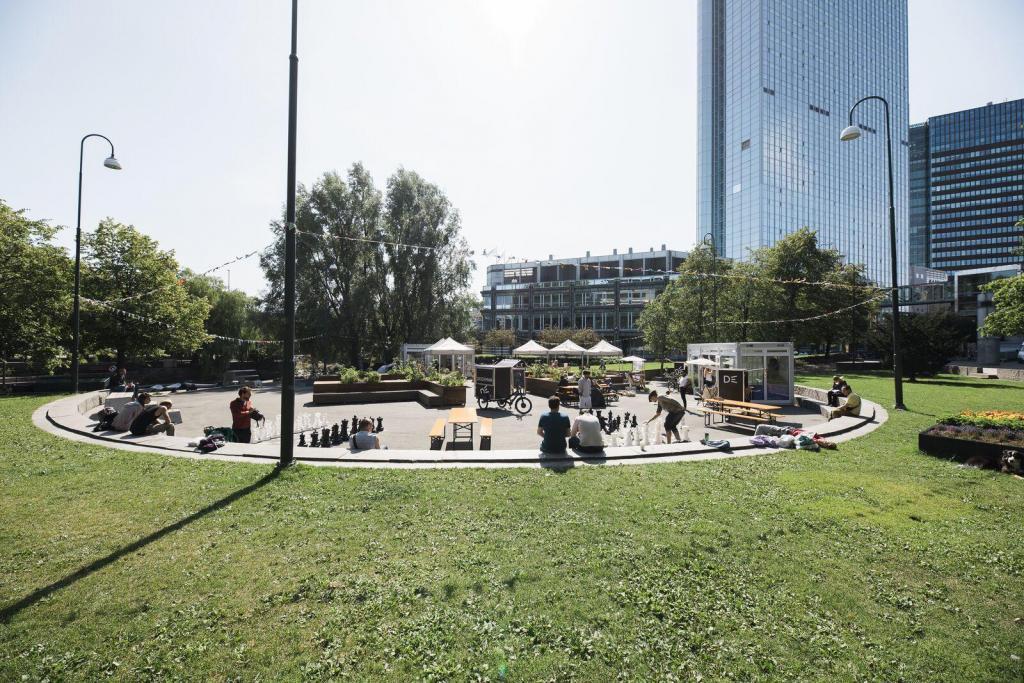