In life you must have vision: Why the most vulnerable in our cities deserve to be seen

In life you must have vision: Why the most vulnerable in our cities deserve to be seen

In an effort to reduce road fatalities, the EU is discussing a legal requirement for the amount of space truck drivers can see through their windows.By Samuel Kenny

“Trucks with better “direct vision” enable drivers to see more of the space around their vehicles. There’s clear evidence that better direct vision would save 550 lives annually“ 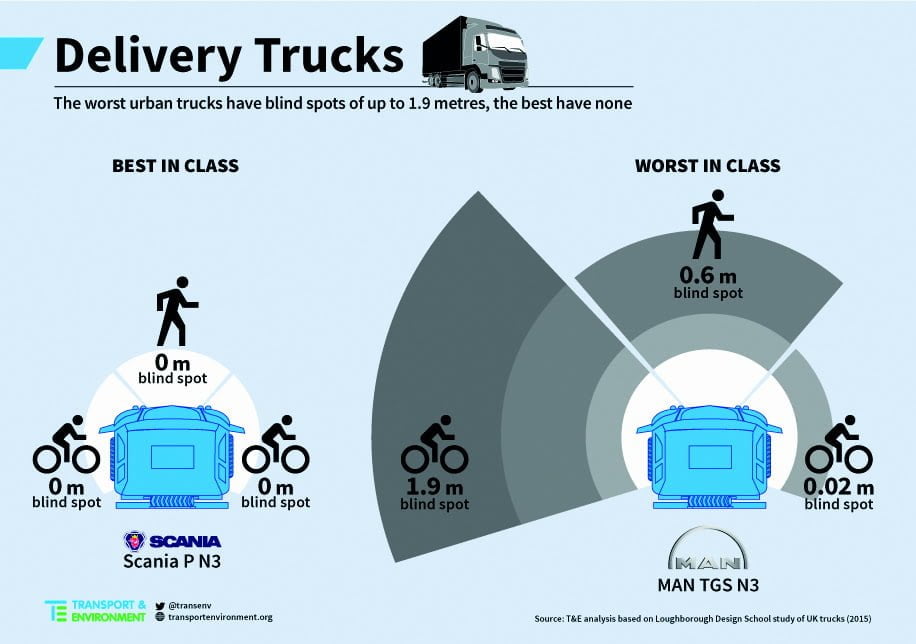 In Europe, trucks represent 2 per cent of vehicles on the road but are involved in 15 per cent of road fatalities. Every year, truck collisions are responsible for the deaths of over 1,000 pedestrians, cyclists, or motorcyclists. The way that trucks are designed can be improved in order for such vehicles to be involved in less road fatalities. Trucks with better “direct vision” enable drivers to see more of the space around their vehicles. There’s clear evidence that better direct vision would save 550 lives annually.

The European Commission published a proposal to review the General Safety Regulation in May 2018. This Regulation defines technologies and design features that must be standard features of new vehicles in order for them to be legally sold on the EU market. The Commission proposed a “direct vision requirement” for trucks. Such a requirement will establish a minimum area that the driver must be able to see directly through the windows of new trucks sold in the EU. In other words, the requirement will reduce the number of truck blind spots.

If cities aim to promote cycling and walking then those cities should actively support direct vision requirements in order for “vulnerable road users” to be better protected. 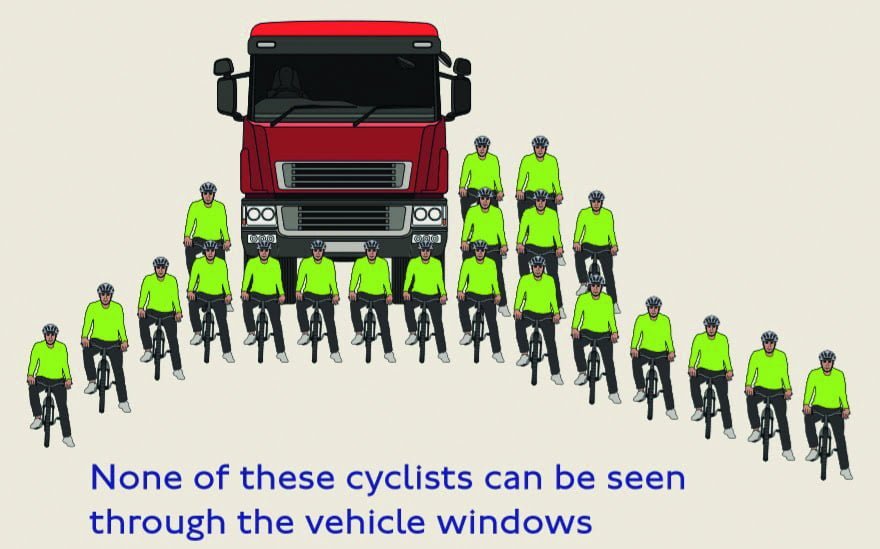 The way trucks are designed and configured has a major impact on what truck drivers are able to see from their cabin (direct vision). The Loughborough Design School in the UK analysed the direct vision and blind spots of top selling trucks in all vehicle categories (long-haul, construction, urban). The study shows that there are large differences between best and worst in class performance. This infographic (Figure 1 above) summarises the findings of the report for delivery trucks. The alarming difference in performance highlights the need for regulation to improve the worst in class.

So why improve direct vision when sensors or mirrors can detect such road users? A cognitive test performed for Transport for London found that drivers react 0.7 seconds faster when they see something with their own eyes through a window rather than indirectly (for example, through a mirror). Improving reaction speeds by 0.7 seconds may not seem like a lot but, in practice, it reduces stopping distance by 5m for a truck travelling at 25 km/h – that relatively short distance can be the difference between life and death.

Sensors that alert the driver every time a pedestrian or cyclist is in close proximity to their vehicle would sound constantly in cities. This overload of alerts could render the sensor ineffective as it is probable that the alert would eventually be ignored by drivers. Furthermore, the driver would need to be able to source the cause of the alert before being able to react to it. Requiring such action delays reaction speeds that in turn reduces the likelihood of avoiding collisions. Sensors may have a role to play on the parts of a truck where the driver cannot possibly see something directly (i.e. behind the trailer).

Transport for London commissioned surveys on truck safety with cyclists and pedestrians. These road users expressed a higher sense of safety when they could make eye contact with drivers. Eye contact allows for cyclists and pedestrians to determine whether they’ve been seen. Improving direct vision enables this interaction to take place in cities. Trials were also performed in London with truck drivers who expressed a lower stress level than usual in city environments when operating best-in-class trucks due to the fact that they could see more of the road around their vehicle.

Transport for London has developed a system to assess the direct vision performance of all trucks. This tool will be used in the future to rate the direct vision performance of trucks that intend to operate within London. The purpose of the rating (a system that ranges from 0 to 5 stars) is to restrict the access of unsafe trucks from entering the city in the future. For more information on London’s pioneering system, see https://bit. ly/2Ovzvjp or search for “London Direct Vision Standard” online.

WHAT CAN YOU DO?

Direct vision needs to come now as part of the reform of the General Safety Regulation, improving direct vision for all drivers of new trucks, particularly to the front and the sides of truck cabins. If supported by the European Parliament and EU national governments, the Commission’s proposal to establish a “direct vision requirement” for trucks would improve the safety performance of new trucks sold in the EU. If we consider the Commission’s proposal, the requirement will not be applicable to all trucks until 10 years from the date that the Regulation enters into force. This 10-year period will only begin once the discussions are finalised in Brussels. It is currently being discussed in the European Parliament and the Council. It is imperative that such lead times are reduced so that safer trucks can be seen sooner on our roads.

Cities are an important voice in EU policymaking. We see an impact when European cities reach out to their national governments and MEPs in the European Parliament express support for this direct vision requirement. A coalition of 18 cities sent a joint letter to the Commission last year that called for truck safety to be a central element of the proposal and the cities voices have been more than noted in the community. Polis also supported this call for a direct vision requirement to be included in the Commission’s proposal to review the General Safety Regulation.

One city alone cannot make all trucks safer. It requires a coordinated effort across the EU. As road safety is important for all cities, this rare opportunity to make trucks safer should not be ignored.

Samuel Kenny is Policy Officer at Transport & Environment If you wish to join this city coalition or want some more information on what you can do, please contact samuel.kenny@ transportenvironment.org 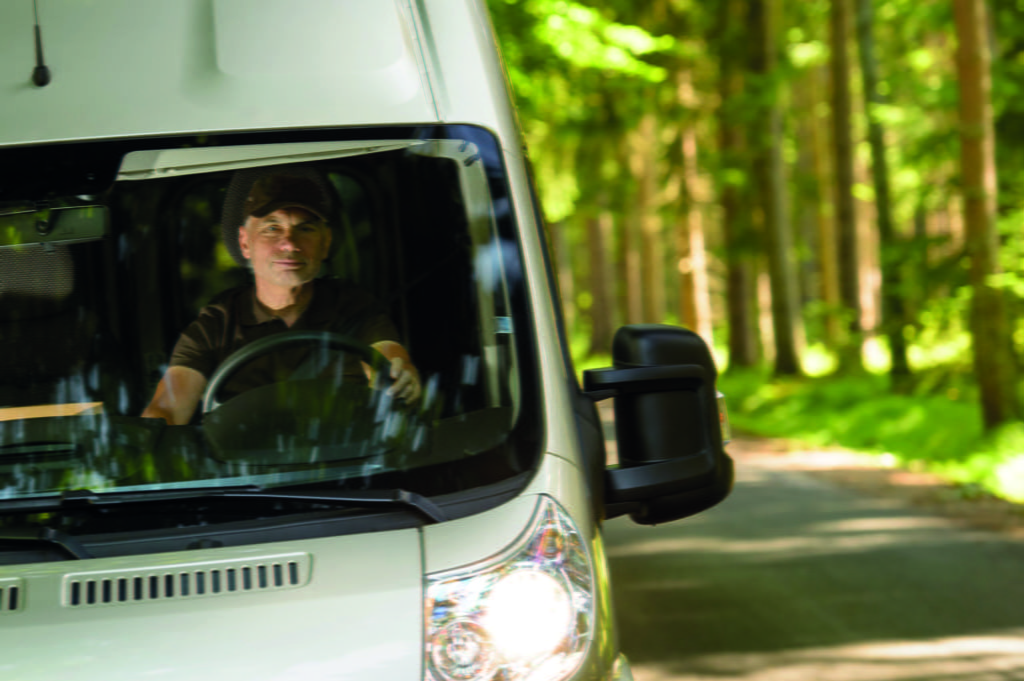 Topics
Road safety
Back to In life you must have vision: Why the most vulnerable in our cities deserve to be seen