Since 2020, the Metropolitan City of Bologna publicises every activity related to cycling under the umbrella of 'Bicipolitana Bolognese'. Bicipolitana represents the formal and communicative application of the MBP, the Metropolitan Bike Plan, included in the SUMP and the statement of a new, cohesive territorial vision driven by sustainability and inclusiveness.

The Metropolitan City of Bologna (MCB from now on) is part of the region of Emilia-Romagna, in northwestern Italy. It counts about 1 million inhabitants and 55 municipalities. Since 2012, the MCB has actively developed and promoted cycling-oriented measures by working on an embryonal metropolitan bike plan, striving to build a bike-friendly territory at the metropolitan scale. This original plan acquired a definitive and integrated shape into the Sustainable Urban Mobility Plan (SUMP) of 2019.

The SUMP represents a clear statement towards managing the energy consumption and environmental sustainability of transport in the metropolitan area. The main goal, aside from building a fair and inclusive territorial displacement offer through the progressive implementation of measures, is the reduction of greenhouse gas emissions by 40% by 2030, compared to 1990’s traffic emissions level – cycling, in particular, represents a key element of succeeding in such goal. 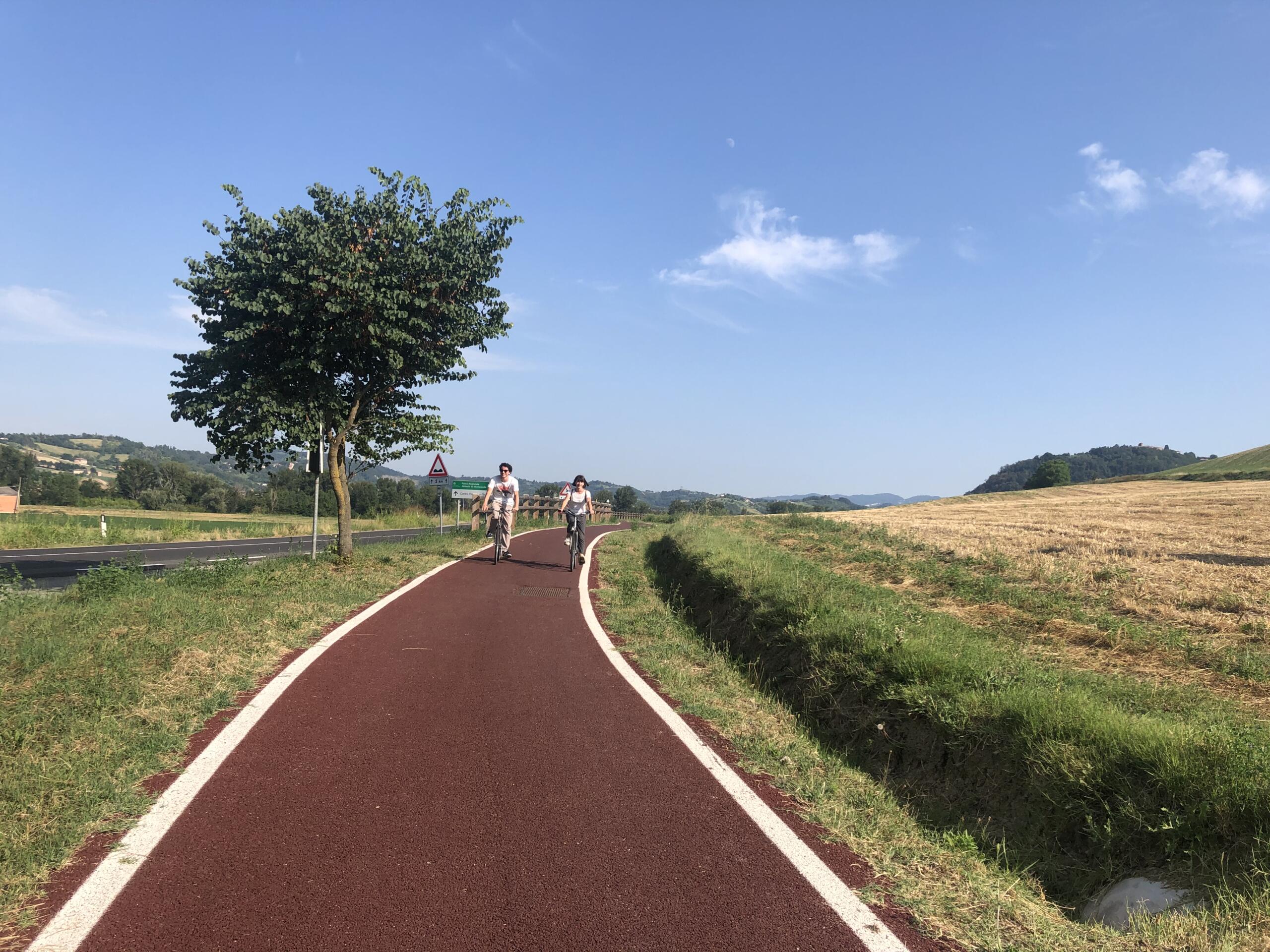 Since 2012, Italy has made great progress concerning cycling. Several government resources helped the development of cycling at local and regional levels, including the promotion and communication of the SUMP. Furthermore, since 2020 every activity related to cycling in the MCB has been publicised under the umbrella of a cycling network called 'Bicipolitana Bolognese'.

The Bicipolitana thus became both the formal and communicative application of the Metropolitan Bike Plan of MCB included in the SUMP and the statement of a new, cohesive territorial vision driven by sustainability and inclusiveness. This objective was strengthened by the adoption of the MTP/PTM (Metropolitan Territory Plan) in 2021.

The Bicipolitana is a metropolitan cycle network that connects the capital city of Bologna to all the main towns, production areas, and functional centres in the metropolitan region. The main structure stretches along ten radial directions, integrated with various cross-connections, for a total extension of about 1,000 km, of which 405 km are already existing or under construction and 160 km are already funded as of December 2021.

The Bicipolitana also includes cycling facilities like rental and repair services, drinking fountains, cycle parks, and velostations, but also cycling signs, communication campaigns, events, websites, interactive maps, and more. It aims to show citizens that it is possible to ride a bicycle instead of driving cars on safe and fast lanes, even in extra-urban areas. The SUMP has scheduled the Bicipolitana completion by 2030. As of now, 42% of the network has been completed, with an additional 16% already funded (monitoring December 2021). 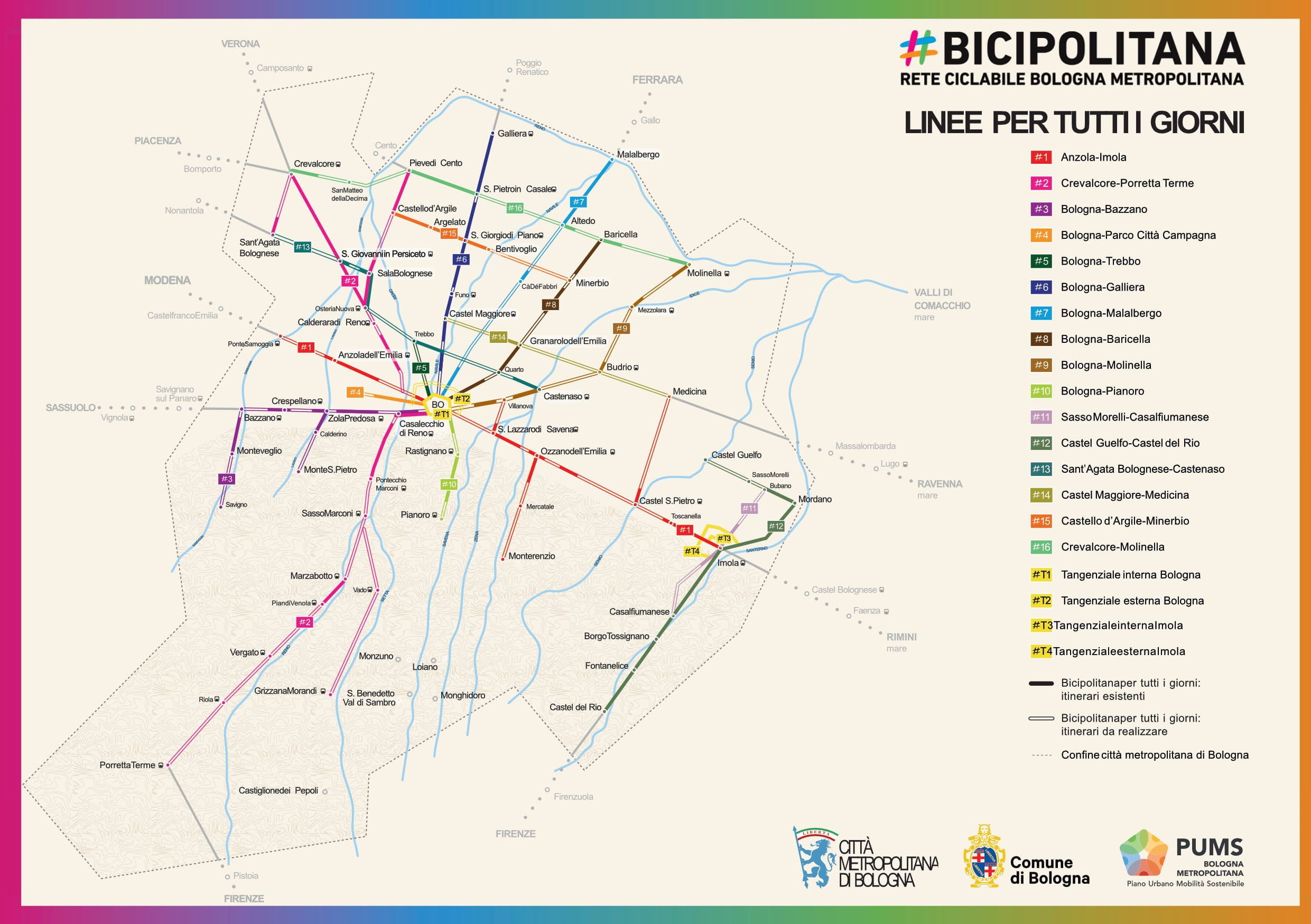 Innovation of the Bicipolitana and reproducible aspects

The MCB promotes different actions to orient the national funding and effectively promotes both the completion of the Bicipolitana infrastructure and the dissemination of a bike-friendly culture.

Concerning the first point, MCB focused on the idea that the infrastructure needs to be continuous and homogeneous at the metropolitan scale. The Bicipolitana infrastructure has been designed at the pre-feasibility project level since 2021, to gain an overview of critical issues, costs of realizations, and hierarchization of the network to be realized, thus strategically orienting the available funding. Two different tools have been developed to apply standard solutions at the metropolitan scale: a technical manual and a cycle road signs manual. In 2022, some signage installations on a large sector of the Bicipolitana network was implemented and the design of some part of the network was pushed forward at the feasibility project level. 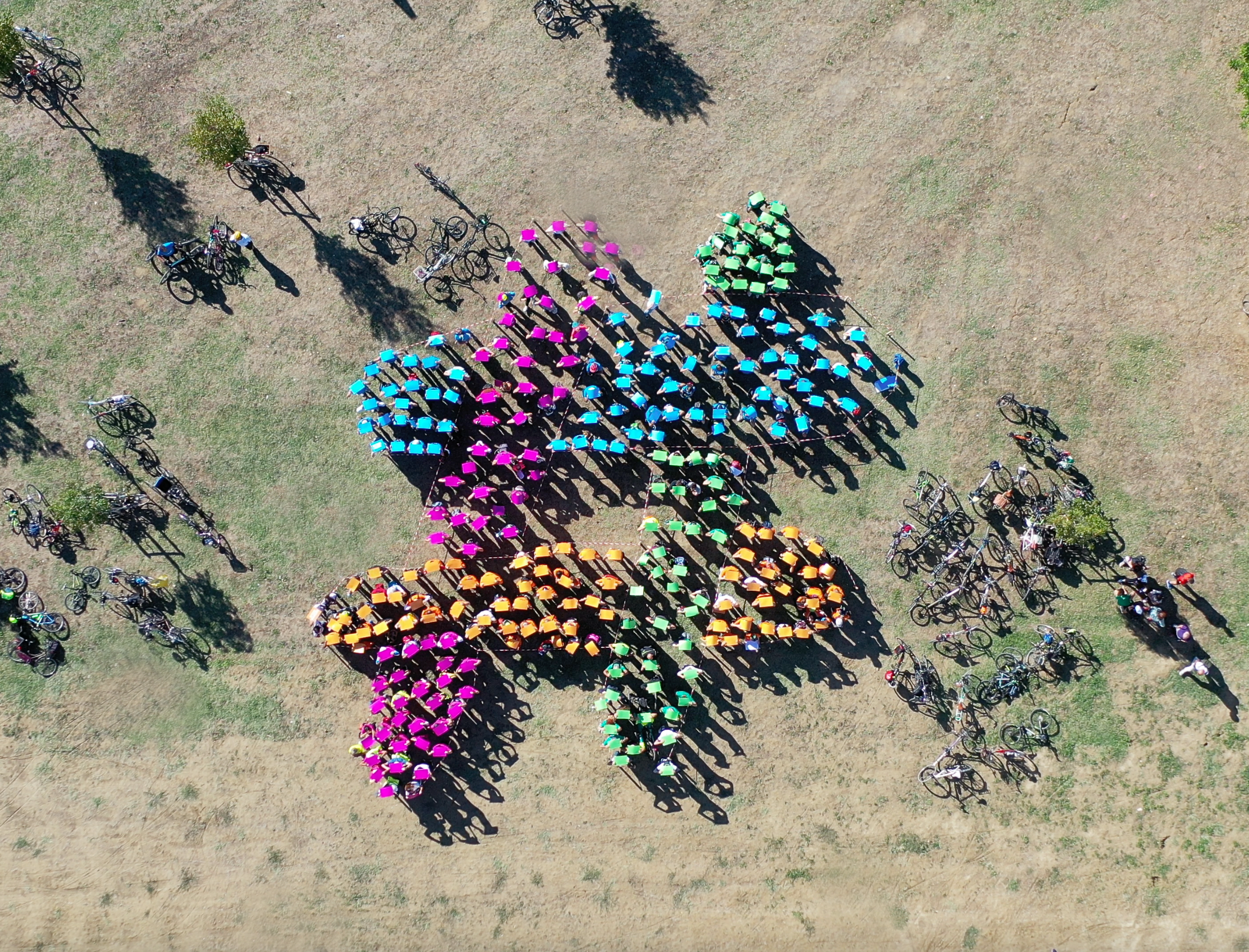 Reproduction of the Bicipolitana logo during the Bologna Bike Pride - September 2022.
Credit: Metropolitan City of Bologna

Finally, in 2022 MCB started a strong and integrated communication campaign that includes an internet website, a metropolitan bike pride with about 3,000 participants, a big event during the EUROPEANMOBILITYWEEK, plus social network activities and a billboard campaign, a commercial spot, and podcasting activities programmed for the winter season and spring 2023. The common theme is to promote a bike culture based on cycling and sharing spaces.

‘Bicipolitana Bolognese’ has the potential to revolutionize the perception, functionality, and accessibility of the metropolitan area by opening unprecedented perspectives for sustainable and inclusive mobility in areas where, previously, circulation was only possible by car.

This experience proves that, thanks to previous mobility planning, it is possible to maintain and expand on previous objectives in territorial development, even in critical circumstances. The Bicipolitana project sits at a critical conjuncture: on the one side, important government funding has been made available; on the other, the area, like the rest of Italy, is dealing with an energetic and economic crisis.

Within this context, the SUMP and, consequently, the Bicipolitana represent key resources to develop a new vision for the metropolitan area and to foster a future society based on sustainability, equality, and inclusiveness. This is because planning shows the way forward. The challenges faced prompted us to give voice to neglected communities, to rediscover the potential of suburban areas, to listen to the people affected by the economic crisis, to enhance local trade, all the while promoting the traditional international role of the Bolognese territory as a pole of tourist attraction and cultural and productive excellence.

In conclusion, the completion of the Bicipolitana and the parallel dissemination of bicycle culture will help citizens not only overcome this period of crisis but, by doing so, to find out an even more attractive, fair, sustainable region – one once again thought and re-designed at a human scale.

Click here to read the article in its original format.

Alessandro Delpiano is Director of the Territorial Planning Area of the Metropolitan City of Bologna and member of the national commission on SUMPs and the Italian Society of Transport Policies. He is lecturer at the Polytechnic University of Barcelona, and author and editor of numerous publications. He has graduated in 1996 in Civil Engineering.

Catia Chiusaroli is the head of the Sustainable Mobility Planning office at the Metropolitan City of Bologna . She coordinated the metropolitan SUMP and member of the Italian “Sun Cycle Route” technical board, and is author of many publications and papers about mobility and transport.

Silvia Basenghi is part of Technical Staff at the Mobility Planning Office of the Metropolitan City of Bologna.  She graduated in Venice in Architecture of the City and has worked in Paris as mobility and urban planner for 6 years. In 2019 she joined the technical staff of the mobility planning office in the metropolitan City of Bologna where she mainly deals with bicycle-related policies. 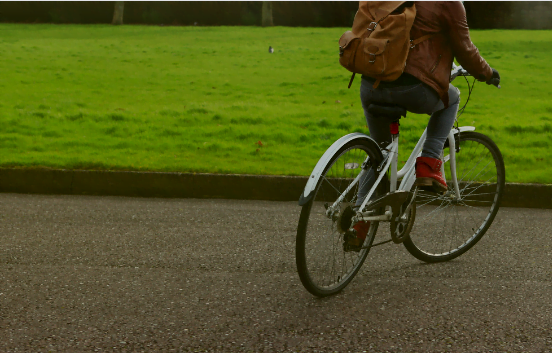