Sergio Fernández Balaguer explains how POLIS member, Madrid is gearing itself up for an automated future.

EMT Madrid, owned by Madrid City Council, manages the bus transport service in the municipality of Madrid. Created in 1947, EMT Madrid now employs over 9,660 workers on its 3,725km transport network, making it one of the largest mobility companies in Spain. The organisation boasts a 2,003 strong bus fleet with 10,024 stops on 212 routes across Madrid, as well as car parking facilities, an e-bikesharing system and the Casa de Campo cable car. The network has established itself as the backbone of Madrid’s public transport infrastructure, carrying 440 million passengers across the city each year.

However, consistent innovation is essential for transit systems to continue to provide cities and regions with accessible, inclusive and secure mobility options. EMT already uses a variety of alternative fuels, Intelligent Transport Systems (ITS) and Customer Information Systems. Now it is turning its sights to automation.

Connectivity and automation in transport (CAT) provides exciting opportunities for expanding and enhancing transport networks. As digital technologies advance, and systems are implemented and tested on larger scales, new and diverse solutions for freight and passenger transport are emerging. However, transition towards this smart and sustainable mobility future requires active management from policy makers. The European Commission, its Member States and industry partners collaborate to achieve ambitious visions for connected and automated mobility in a digital single market. To pursue these targets, the European Commission initiated the Strategic Transport Research and Innovation Agenda (STRIA) which develops and deploys low-carbon transport technology solutions for intelligent, safe, secure and accessible mobility for cities and regions. The future of connectivity and automation are integral for Europe’s economic and social goals and are instrumental for the cross-modal integration of transport, as well as for critical improvements in mobility safety. As the main public mobility operator in Spain, EMT Madrid is acutely aware of the opportunities automation offers. Full automation on public roads and for traffic management may seem futuristic, indeed, there are still many uncertainties surrounding the communication technologies on which automation relies. Nonetheless, in controlled environments, such as EMT operations centres and bus depots, automation is already improving productivity and efficiency of operation.

In an effort to keep ahead of the latest developments in automation, EMT is participating in two projects to advance automation across Madrid’s bus network.

One such project EMT partners with is SHOW, “Shared automation Operating models for Worldwide adoption”, an ambitious European project supporting the deployment of shared, connected and electrified automation in urban transport. SHOW it is one of the most comprehensive autonomous vehicles urban demonstration initiative in Europe. With a budget of 36 Million euros the project aims to advance the automation of transport in line with the priorities and strategic lines established by the European Union, including transport on demand, Mobility as a Service (MaaS) and Logistics as a Service (LaaS), all through real pilots in different cities. 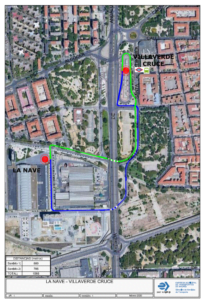 The project will last for four years and its actions will take place in the so-called five “mega sites” of Rouen and Rennes (France), Karlsruhe, Mannheim and Aachen (Germany), Graz, Salzburg and Vienna (Austria), Stockholm (Sweden) and Madrid, as well as in other secondary locations (called “satellites” and “followers”), reaching a total of 20 cities throughout Europe. EMT is obviously focusing on establishing the SHOW project in Madrid.

In partnership with the organisations Tecnalia, Irizar and Indra, EMT will launch an autonomous bus service in 2022 by adapting existing microbuses with the necessary equipment. A 1.6 km-long shuttle service will connect “La Nave” (Municipal Innovation Hub in the Villaverde neighbourhood), with the “Villaverde Bajo Cruce” metro station and multimodal area.

This service will be in operation for a minimum of 12 months, during which it will operate under real conditions, monitoring its operation to establish how future autonomous public transport optimises service delivery..

SHOW aims to support the deployment of shared, connected and electrified automation in urban transport to advance sustainable urban mobility. SHOW is coordinated by UITP in collaboration with 69 partners from all over Europe (companies, operators, technology providers, associations, research centres, etc.), with cooperation from international organisations from the US, South Korea, Australia, China, and other countries. SHOW will conduct real-life urban demonstrations in 20 cities in Europe for 24 months. 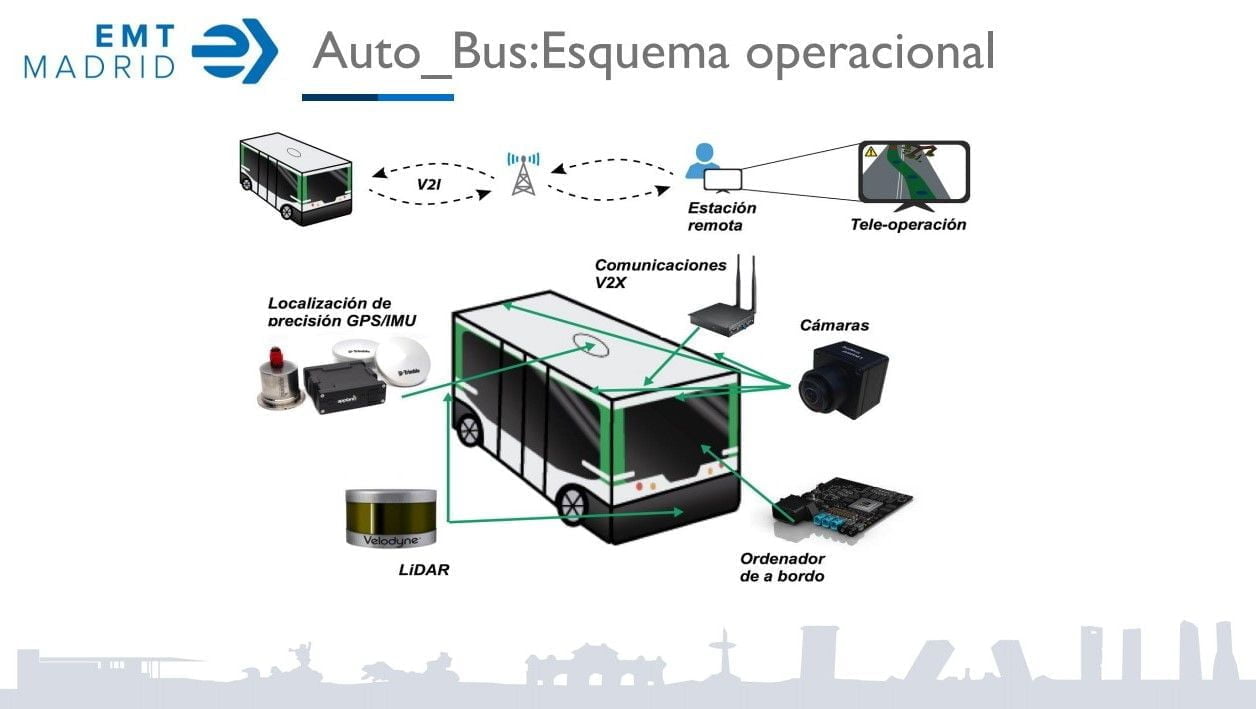 Operational scheme- the technology at the heart of automobility changes, © EMT Madrid

The SHOW project runs alongside the nationally based project, AUTO-BUS. This second project is financed by the Spanish Centre for the Development of Industrial Technology (CDTI), the Ministry of Economy, Industry and Competitiveness, with input from the Centre for Automation and Robotics (CAR) and the University Institute of Automobile Research (INSIA).

AUTO-BUS aims to boost automation within the daily operations that are carried out in Madrid’s bus depots. A core tenet is the exploration of possibilities for expanding automation, examining issues such as enhancing operations centres, refuelling access, and cleaning and parking operations, thus streamlining services and maximising the use of space. As part of this project, EMT is exploring innovative charging technologies (such as inverted pantographs which facilitate electric charging without the need of human operators), as well as smart cleaning and parking technologies. 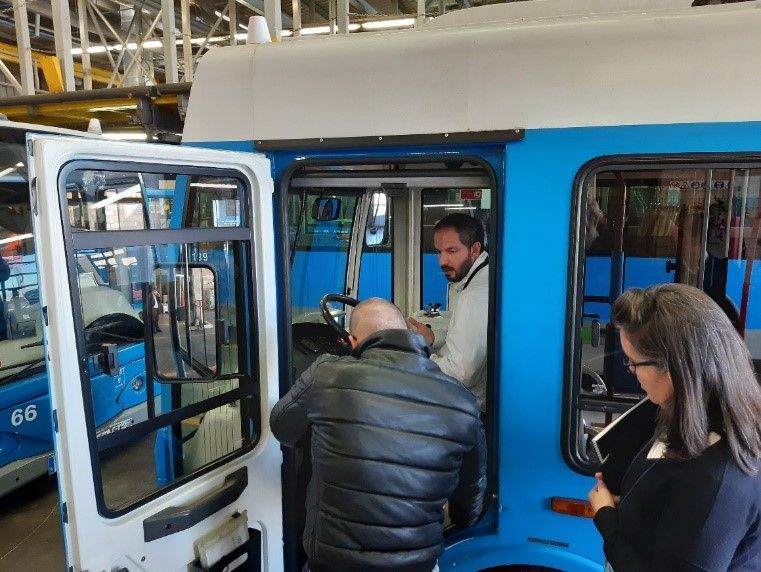 The CAT (Connectivity and automation in transport) is out of the bag!

Connected and automated transport (CAT) technologies aim to increase the efficiency and safety of transport systems. The introduction of such technologies and services can improve traffic flows, optimise infrastructure, increase passenger numbers, enhance efficiency of goods transport and foster the emergence of multi-modal transport solutions. Read more in the Strategic Transport Research and Innovation Agenda (STRIA), Roadmap for Cooperative, Connected and Automated Transport

What does EMT bring to the table?

EMT is in an auspicious position to assist in the expansion of automated vehicles. It does so through:

Autonomous mobility is coming and is set to revolutionise urban mobility. Autonomous vehicles offer healthier, cleaner and greener solutions for cities, shifting the ways people travel, while transforming the ways mobility is provided and opening new opportunities for public-private partnerships. However, successfully integrating new technologies into effective public transport networks, requires understanding these changes and preparing for them. City and regional transport authorities must adapt policies accordingly, facilitating a structured dialogue with industry and service providers.

Critical questions remain. Data sharing and governance, security, scalability of service provision and reliability must still be addressed. By participating in these projects that explore and pilot automation, EMT helps to answer these questions, while enhancing Madrid’s public transport network, and establishing itself as a leader in research and innovation while sharing best practices with cities and regions across Europe 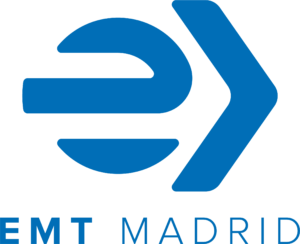 Empresa Municipal de Transportes de Madrid (EMT) is a public limited company owned by the City of Madrid. It is responsible for the management and operation of urban bus services, public bicycles (BiciMAD), municipal cranes, public and resident car parks, and cable cars. EMT is integrated into the Madrid Regional Transport Consortium, an authority responsible for the planning of public transport in Madrid. EMT has also a consultancy department that provides technical assistance to Madrid City Council on sustainable urban mobility matters, as well as to other transport operators around the world. 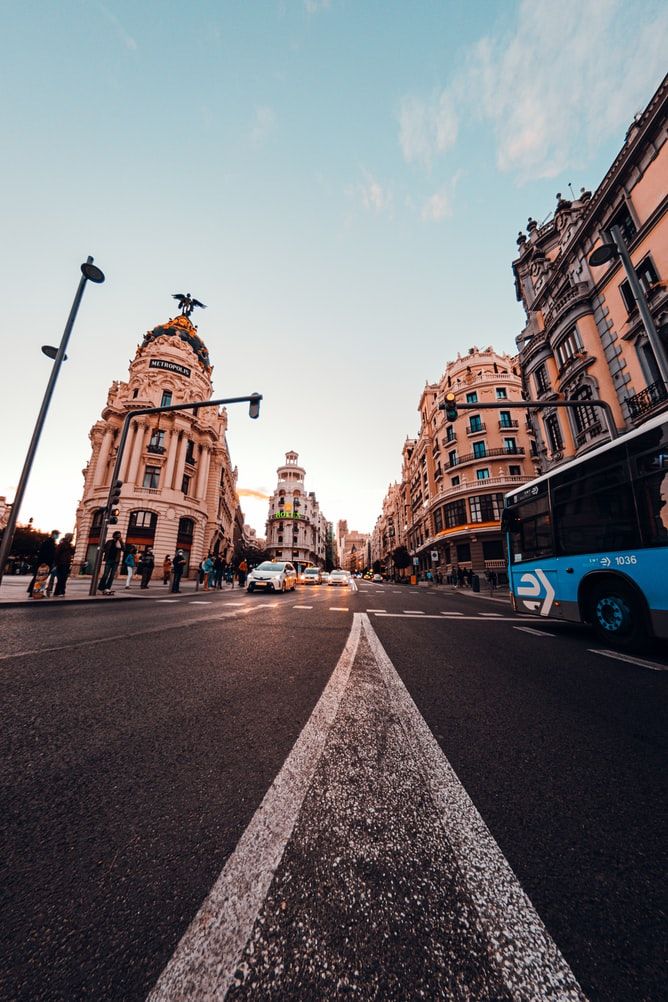