The city that said yes to tolls

The city that said yes to tolls

Hans Kringstad and Lacie Goff examine Trondheim’s long-standing relationship with toll roads and how the city’s current strategy includes literal, rather than political or financial, shortcuts

Trondheim, Norway is a unique city. The city’s politicians have cut car traffic and increased environmentally friendly travels without political uproar. Meanwhile, the three other major Norwegian cities are experiencing strong pushbacks with aggressive campaigns led by a political party whose entire platform is based on saying no to toll money.

So, what is it with Trondheim that sees its citizens so supportive of tolls? Two important reasons have led to peace and tolerance in this northern city.

First of all, Trondheim was a forerunner with Greener Trondheim, a collaboration project where motorists contribute financially to measures that aim to recruit more people to walk, bike and use public transportation. Secondly, the inhabitants saw concrete results and they saw them quickly. New bike lanes, better and more affordable bus options, safer school routes and even new motorways that freed up bottlenecks and areas prone to traffic jams.

The broken promise to never again reinstate the tolls can be attributed to the Parliament’s ruling for a climate agreement with the goal of making Norway carbon neutral within 2030. To make this goal more enticing, the state offered money to cities who were willing to cut their transportation emissions, and this financial support was essential for Trondheim to be able to build new infrastructure. Each year the number of inhabitants was increasing by 3000, and motor traffic grew in such a way that the city couldn’t afford to solve these problems on its own.

The result was a collaboration with the Norwegian state, the region of Trøndelag and the municipality of Trondheim. Put simply, Greener Trondheim works in practice that for every NOK 1 million (€99,000) motorists pay in tolls, the city gets a NOK 1 million extra from the Norwegian State to use on transportation.

To fuel this, the State has implemented a requirement stating that the city’s private motor traffic is not to increase, even though Trondheim’s population increases each year. Therefore, all of these extra trips need to be taken by walking, biking or collective transportation. In order to achieve this, Greener Trondheim relies on a system of penalty and reward. The rewards include a better collective transportation network and better infrastructure for cyclists and pedestrians. The restrictive measures, or penalties, for motorists are first and foremost tolls, but also parking limitations and the conversion of motorist lanes into bus lanes.

In Bergen, Norway’s second largest city, a new political party against tolls scored highest in opinion surveys before the most recent municipal elections. In the Stavanger area, the party received 9 percent of the vote. In Trondheim, the party didn’t even exist

The first restrictions came in 2008 when the buses got their own lanes through the city centre, which meant an increase of cars in the other lanes. In the beginning the protests were plentiful and the pessimists predicted queues and chaos in the city centre. But with a more attractive bus offering, it quickly became evident that more people started busing, removing unnecessary motorists from the roads and allowing both cars and buses alike to get from A to B faster. Today, surveys show that an overwhelming majority are in favour of Trondheim’s bus lanes.

Trondheim’s tolls first sprouted up in 2010. Previously the majority had been against needing to pay a fee to be able to drive in and out of the city, but these opinions changed gradually over time. Even though the toll system was widely expanded in 2014, it didn’t take long before the majority of those surveyed answered that they were in favour of the tolls. The latest survey in 2018 showed that 49 percent were positive and only 30 percent were negative.

While positivity increased in Trondheim, strong opposition was growing in other, similar cities in Norway. In Bergen, Norway’s second largest city, a new political party against tolls scored highest in opinion surveys before the most recent municipal elections. In the Stavanger area, the party received 9 percent of the vote. In Trondheim, the party didn’t even exist.

When Greener Trondheim was established in 2008/2009, the politicians put into effect 10 concrete goals to be reached by the end of 2018. The two first goals were:

Greener Trondheim has succeeded with both. Emission reduction is attributed to a boom of electric cars and the blending of biofuel into diesel. Without the actions of Greener Trondheim, that is if people travelled the same way as before while the population increases each year, it is
estimated that the city would see 60,000 more car trips each and every day.

Since 2010 approximately half of the funding from Greener Trondheim has been used on main roads, and the other half on collective transportation, cycling, pedestrians and traffic safety for those who are most vulnerable. The project also works directly with companies and schools to encourage people to choose greener commuting methods to and from work and school. 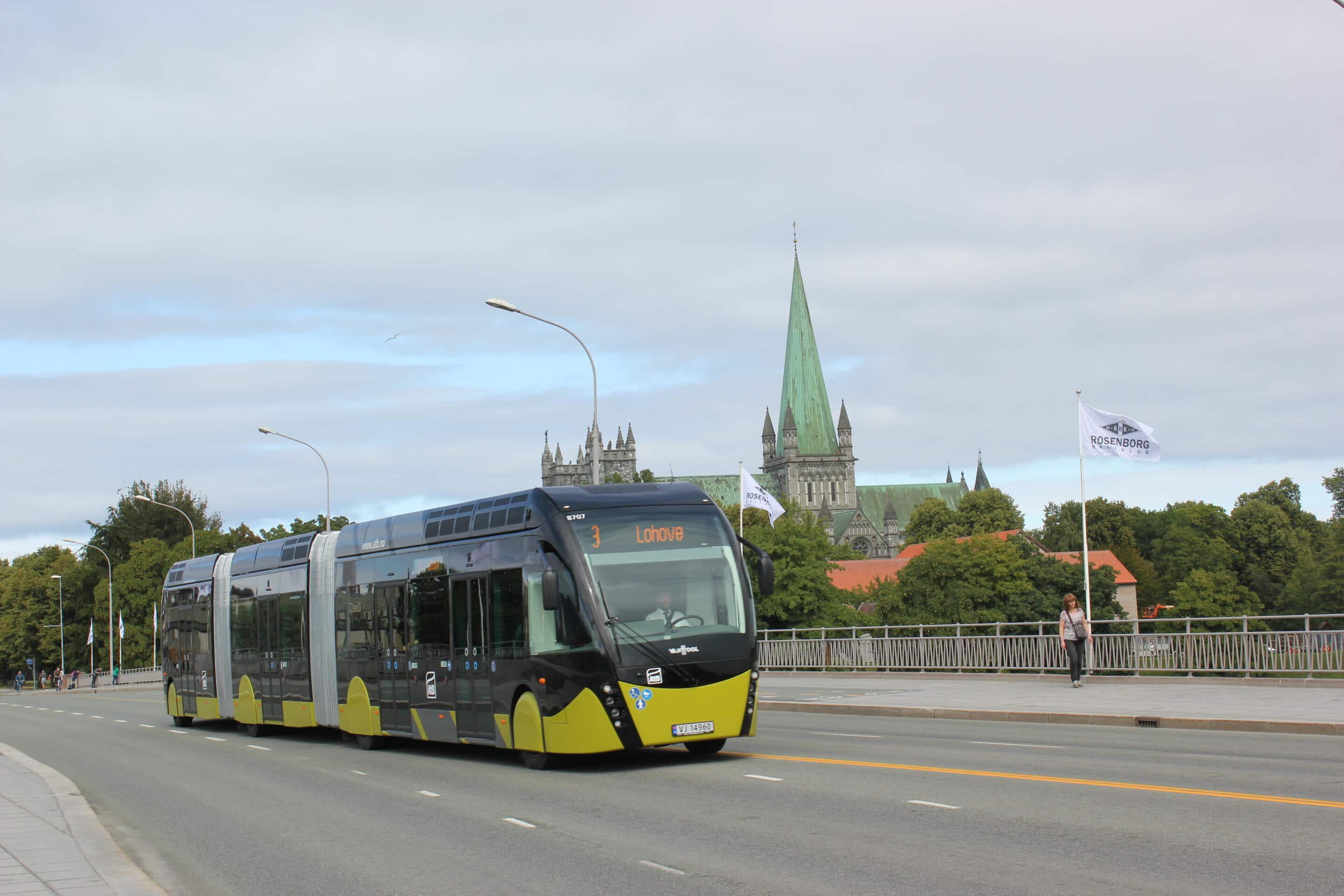 24-metre long buses have become a part of Trondheim's cityscape since August 2019. The new bus system makes it possible to increase the use of collective transportation in the years to come

One example of a measure that has been implemented here is the expansion from two to four lanes on the highway leading from the south of Trondheim to the neighbouring municipality. Building roads is a risky endeavour because it can make driving more attractive, but at the same time, eliminating bottlenecks in traffic is crucial for lowering emissions and can have re-routing effects that benefit the city as a whole. In the aforementioned example of road expansion one such bottleneck was removed, giving commercial vehicles and semi-trucks a more efficient route where they no longer needed to drive via the city centre in order to reach the warehouse terminal.

The primary intention of Greener Trondheim is to build new constructions, but the project can also supply money to operations and maintenance. Collective transportation throughout the city now receives around NOK 200 million each year which helps fund more frequent bus routes and lower ticket prices, amongst other benefits. At the same time as tolls were implemented in 2010, Greener Trondheim contributed funding to expand the bus route network. In addition, the price of a bus card was reduced by 14 percent to 54 percent depending on ticket type, all of which resulted in an immediate increase in the use of bus transportation.

In 2019, Trondheim radically changed and expanded the city’s bus system. The buses now operate within a tighter network system (referred to as “Metrobuss”) which requires more people to transfer buses during their trip, but which also drastically increases the capacity of the system. Increased bus capacity is essential for ensuring that personal motor traffic does not increase, and before this restructuring, the capacity of Trondheim’s bus system was reaching overload. Greener Trondheim builds infrastructure for “Metrobuss” for a total of roughly NOK 3 billion (€293m), including stations and transfer points along the main lines. The state covers half of the expenses and the rest comes from toll money. The new metro system includes a modern and environmentally friendly bus fleet with 300 vehicles, of which 58 are 24-meter long “metrobuses.” 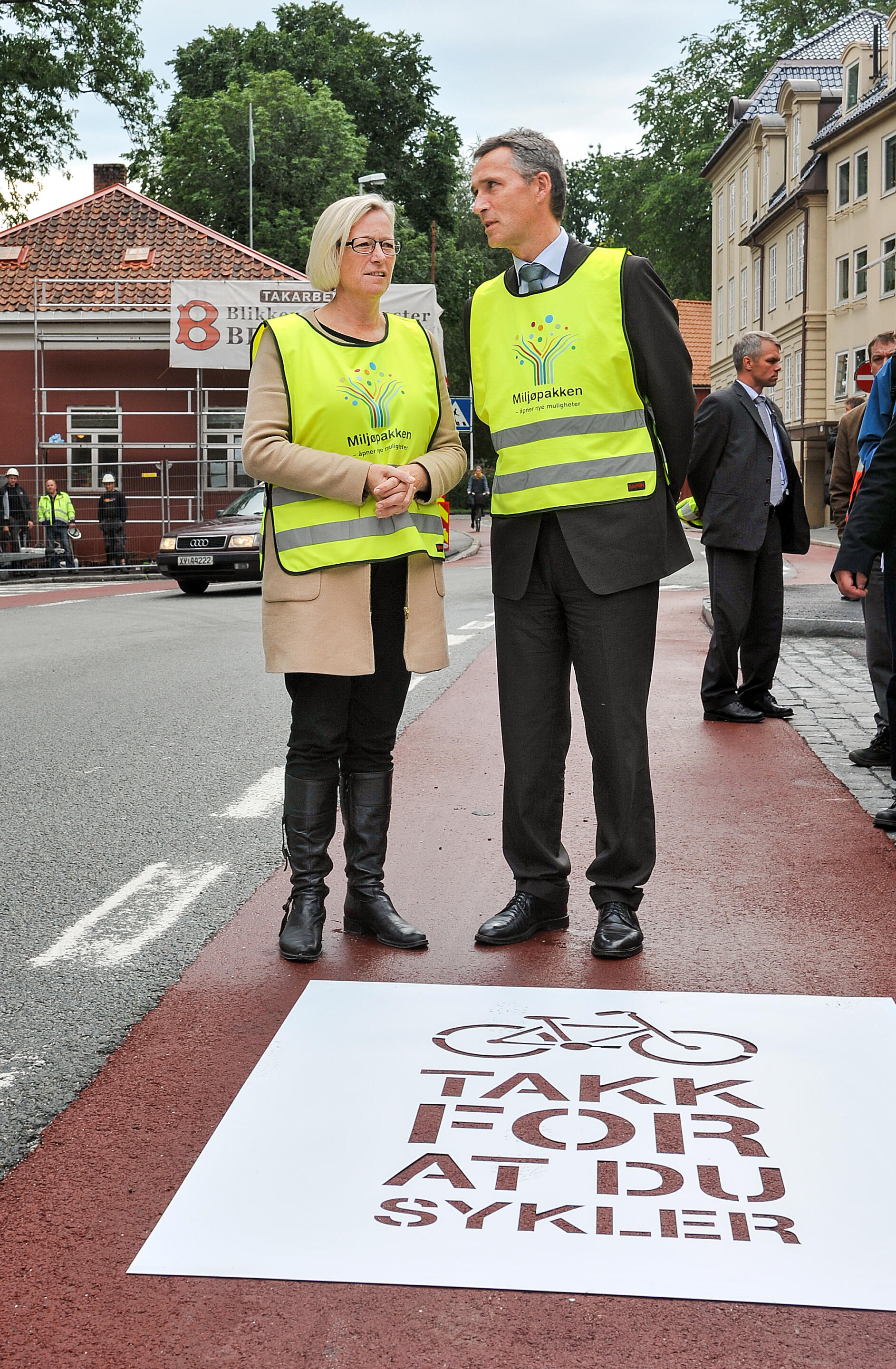 Since 2010, Greener Trondheim has built 41 kilometres of new bike lanes. This includes nine bridges which help to connect the many parts of the city together, and Greener Trondheim is constantly working to create a coherent network of bike lanes throughout the city. But space in the city centre is limited, and finding good solutions for both cars, buses and bikes in the same streets is challenging. As a means of acknowledging the importance of good biking alternatives, Norway’s Prime Minister at the time, Jens Stoltenberg, opened the first red bike lanes in the city centre in 2012.

Greener Trondheim prioritizes pedestrians, which account for nearly 30 percent of all trips taken in the city. A specialised pedestrian-focused group is dedicated to mapping, planning and building shortcuts throughout the town. These shortcuts are paths that can save one anywhere from 1 to 16 minutes or more when walking from A to B, thus making walking a more attractive transportation alternative. Over 500 paths are mapped out including the so-called ‘elephant paths’ or ‘desire paths’ (paths and tracks made over time by people to go from A to B in a faster way if there is no designated footpath), and so far, 40 of these have been completed. Here the work includes installing good lighting, adding handrails where the paths are steep and laying good asphalt to make the path easy to use and easy to plough for snow in the winter. Many of these shortcuts lead to schools, which has led to 16 of the city’s schools now having a safer school route for the city’s children.

The mobility advisors at Greener Trondheim are responsible for the measures that focus on communication and psychology. They work as a supplement to the physical side responsible for infrastructure and construction. The mobility advisors work directly with companies and schools to encourage and facilitate for the employees and students choosing greener means of commuting.

One of the projects the mobility advisors have recently launched is “HjemJobbHjem,” which translates to HomeWorkHome. This is a pilot project set to last until June 2020, and based on the results, could become a permanent offering from 2021. In “HjemJobbHjem” companies sign themselves up to participate and their employees receive a large package of goods and services in exchange for the company implementing restrictions on their employee parking policy. This bases itself on the research that shows that free parking at work is one of the biggest barriers for greener commuting to and from work. Some of the goods that employees of participating companies receive include a discounted ticket for collective transportation (bus, tram and train), e-bike loaning, free bike-reparation days, a reduced rate for the city-bike pass and assistance to test winter biking with a free set of spiked tires.

Greener Trondheim will continue for at least another 10 years, and we’re excited to see what we can accomplish. 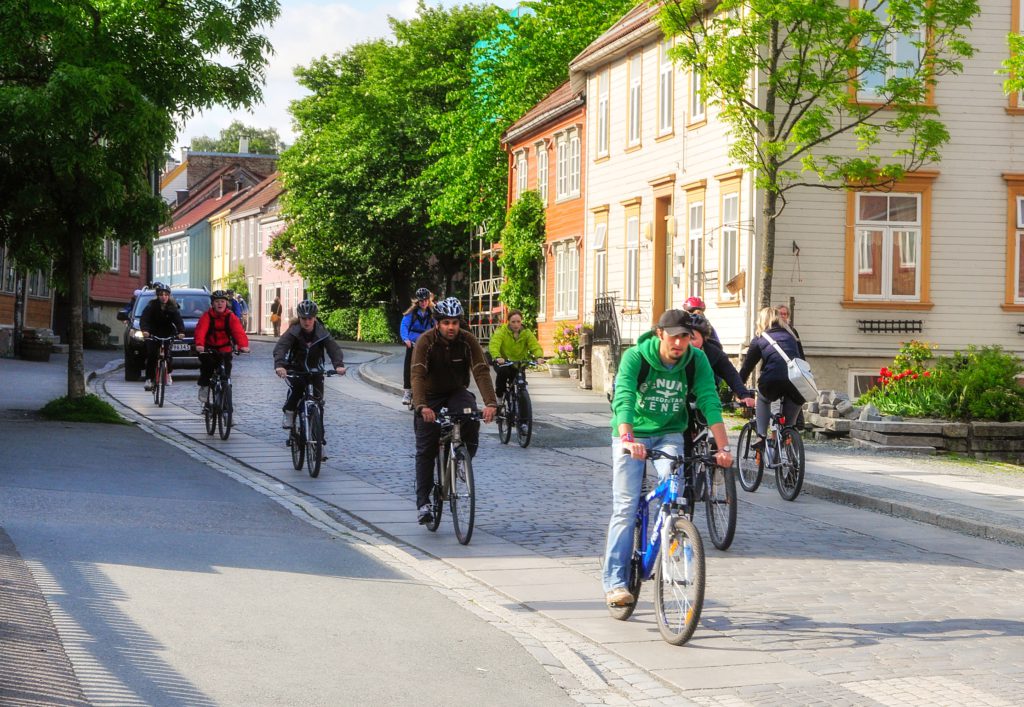