VIL is Flanders’ sole innovation spearhead cluster for logistics. As the spearhead cluster for logistics it is also a membership organization that harbours some 550 logistics stakeholders. It is the region’s reference when it comes to company-oriented innovation in logistics and will remain so for the coming decade supported by a Covenant with the Government of Flanders. VIL focuses on four domains: digital, sustainability, Flanders’ Gateways and urban logistics.

The primary focus lies with projects and their subsequent valorisation. VIL acts as project manager and executor bringing together different key stakeholders around pertinent innovation tracks and leverages collaboration. There is specific attention for the valorisation of such projects focusing on maximal implementation of new concepts and direct contribution to the businesses’ cost-effectiveness.

Autonomous vehicles can be deployed for efficient parcel delivery in cities. The technological possibilities are promising even though a large-scale implementation of such vehicles for parcel delivery might still take a few years. Legislation needs adjusting and volumes need to be sufficiently large. In many cases this will be the result of various forms of collaborative models.

In the ALEES project VIL, together with seven companies and the City of Mechelen investigated the possibilities that autonomous vehicles can be used to make deliveries within city centres. In Mechelen, a city with a population of about 85,000, the high density of business activities results in a high level of freight traffic. For this reason, the city counts the reduction of CO2 emissions due to urban freight transport among its main mobility and environmental objectives. In this context, autonomous vehicles might offer numerous advantages. They are compact, silent, emission free and safe. They operate under flexible route planning and show better fill rates and subsequently realize higher efficiency of deliveries. An increase in consolidation of volumes results in less traffic and improved quality of life in city centres.

An ideal scenario consists of a hyperconnected network in which autonomous vehicles are used to their maximum capacity. Inbound volumes, such as stocks of local retailers can be stored in city distribution centres at the edge of town. The autonomous vehicles can be used to provide goods to either the retail stores or micro-warehouses in the city centre that act as connectors for all possible forms of local or low- or emission free distribution.

To make this concept profitable there should be enough volume. The Flemish region does not have many large city centres, so collaboration and consolidation of volume is key. Such collaboration between various parties is crucial but at the same time the most difficult task.

A first licensed test of an autonomous vehicle in the public domain in Belgium took place on 25 May 2018. An EasyMile EZ10 vehicle was used in centre of Mechelen. The vehicle ran autonomously and made various stops at local retailers delivering and picking up all kinds of parcels. Several scenarios were tested amongst which was the delivery of passively cooled goods. “Thanks to the use of dry ice we were able to demonstrate that cooled and frozen food stuffs can reach their destination in city centres safely by using autonomous vehicles. The cooling elements accompany the journey from producer to recipient without breaking the cold chain and this without any external intervention,” says Koen Dragers, key account manager at ACP. “This seamlessly integrates with the use of autonomous vehicles for last mile deliveries. As a participant of this project we are extremely pleased with the demonstrator as well as by the extremely positive reactions from both the participating retailers as from the public in what is the most densely populated shopping street of the City of Mechelen.”

In the next phase, long-term testing needs to be organised together with one or more logistics service providers, cities and the competent regional and federal agencies. The importance of a coordinated approach while testing such autonomous vehicles cannot be stressed enough. Mutual injection of knowledge and experience of both industry and the logistics sector must empower the authorities with specific expertise. Ultimately this will lead to a faster implementation of autonomous logistics electrical entities for city distribution and the realisation of its associated benefits.

In this collective research project, the state of IoT technology and its potential use for city logistics and distribution were investigated.

In a first phase of the project, the following potential application areas were defined: intelligent loading and unloading zones, notification of the retailer, autonomous microhubs, product traceability, carrier and vehicle traceability, temperature control and selection of the appropriate storage location.

In the second phase, after consultation with the different project participants, the case of an autonomous microhub in the city was selected for the proof of concept. Through a city microhub, goods outside the city can be consolidated, allowing green last mile delivery to stores or consumers (through e.g. a bike courier). Such a microhub can also be used as a collection point, or for reverse flows. But such a hub represents an extra stop, hence extra cost compared to the current way of delivery. Therefore, the project focused on the use of IoT to make the microhub autonomous so that the extra costs related to this set-up can be reduced to a minimum.

For the proof of concept, the microhub got located at the Thomas Moore School at the Kronenburgstraat in Antwerp. A loading and unloading zone with parking sensors was created with the help of the city of Antwerp. Antwerp is the second city of Belgium by population and is home to Europe’s second largest port. The city’s need to reconcile freight and logistic transport with major flows of commuters and visitors make it a perfect location for the proof of concept.

Imec developed an android app that allowed Proximus and Samsonite to book a delivery slot in the loading and unloading zone. The last mile was executed partially with a Stint operated by a student and partially by bike courier Cargo Velo. An electronic display in front of the zone and connected to the app highlights that a delivery will take place so that the zone will not be occupied by other users. Through an intelligent lock connected to the app, the driver can open and close the intelligent door lock installed on the microhub, allowing the microhub to be operated without personnel. In a further phase one could install in the microhub a locker or create separated zones accessible through a code created by the app in case multiple parties make use of the micro hub. A first high-level economic analysis indicates that the IoT technology can reduce the extra costs due to this logistical set-up, but that the size of the saving depends on factors like the number and the size of the packs, the distances between the microhub and the delivery addresses, the size of the vehicle used for the last mile and so on.

As a general conclusion, the Internet of Things can make a considerable contribution towards a more reliable and efficient city distribution. Current identified roadblocks for a large-scale implementation are a lack of collaboration, openness and standardization of the different technologies that would allow the different smart city solutions to be easily integrated into one platform. 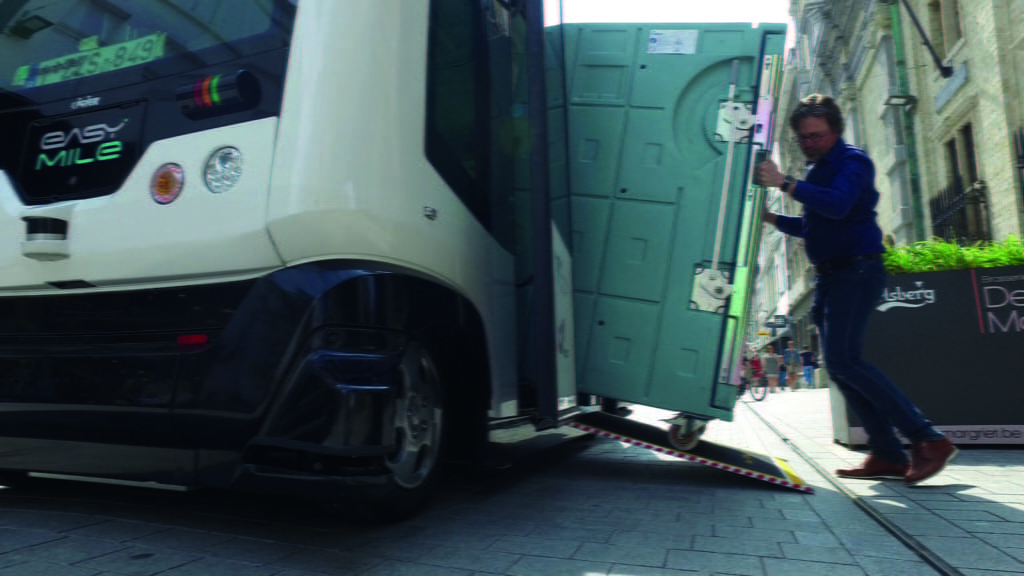 Both ALEES and Intello City have revealed a clear need for an integrated solution for city deliveries. The R!sult (Responsive Sustainable Urban Logistics) project therefore has the ambition to work out and validate a generic logistic concept for ideal city deliveries. Important aspects are smart use and combination of logistic modes and to provide and utilize storage and cross-dock capacity (microwarehouses) in and at the edge of the city.

VIL wants to work out a model for sustainable as well as economic city logistics that is beneficial to all stakeholders (producers, cities, logistic service providers, traders and citizens). To accomplish this, it is important to define the use of the right combination of transportation modes, the required volumes and other conditions that make such a model viable. Logically, the business model and IT requirements to support such a concept will have to be investigated as well.

Some 26 participants (four cities and 22 companies) have committed to this project that kicked off in October 2018. Watch this space to read about the continuation of our collective research and development journey. 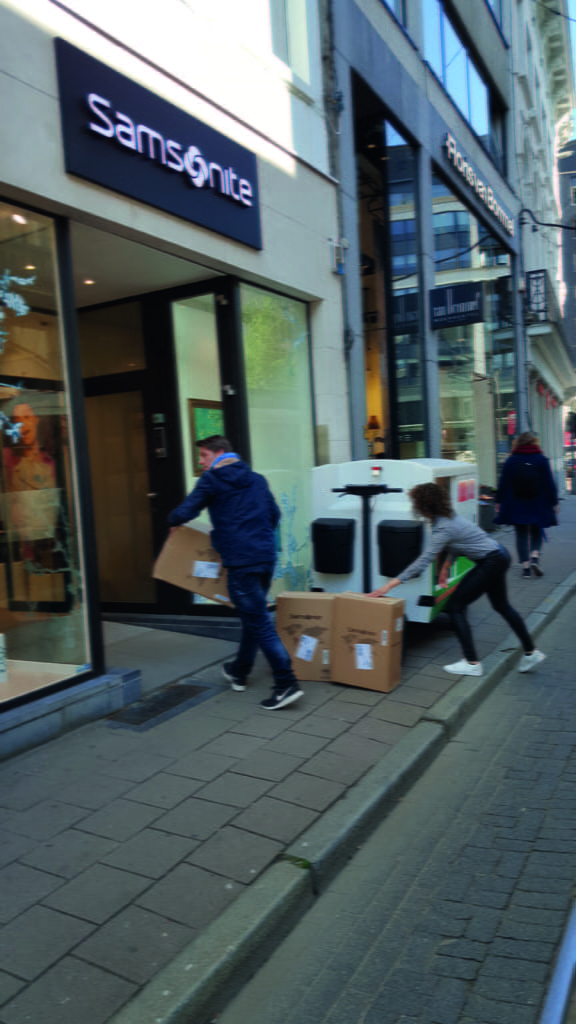